Not many people know that Sikkim was an independent kingdom until 1975. It was jammed in a limbo between monarchy and communist tendencies coming from both India and China.
Still it's a very shake state. China is next door, and even if no one in the western world heard a word of it there are some serious tensions there. Foreigners need a permit to enter Sikkim and if you want ti visit upper Sikkim then you will need to guide up and get another permit in the top of that.
Sikkim fills more like Nepal rather than India. People are Nepali, the language is Nepali, not many folks wanna hug and take your picture that is definitely more Nepali then Indian. Any one who spent an hour in India would understand.

Tea, train, town
On this trip to India I came with a bucket list, and since I never met anyone been to Sikkim it was surely on the list! 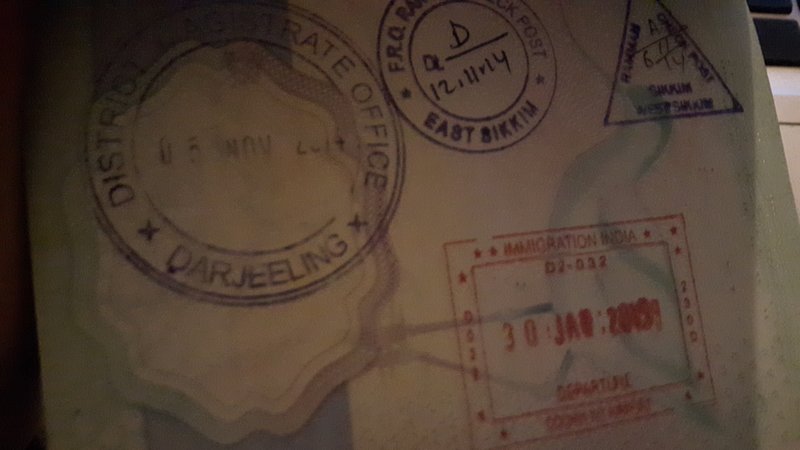 There are two ways of getting into Sikkim; one is via Rangpo checkpoint if you are going to Gangtok; another one is via a windy secondary road to Jorethang, if you are planning to to go towards Yuksom the ancient capital of Sikkim kingdom. If you chose the former you can get your permit at the check point (DO have your passport pic and a cope of your passport) the latter requires you getting a permit in Darjeeling . Of course we had to go the hard way.

Well, if bureaucracy wasn't invented in India it was surely perfected there; and Sikkim permit will make you believe that... big time!

First you need to go to a "Sikkim Travel Desk" at the immigration office, your hotel will be able to point you there. It's just apposite SBI (State Bank of India). Enter one dull, dark building ... find the desk where they process foreigners... tell them that you want to go to Sikkim (NO SHIT!), and wait to have your permit written out. Actually not as leniently as I made it sound. At the end you get your Sikkim permit written it out to you! Bingo... Well not quite, it still needs to be stamped by a magistrate to become valid. They tell you that you have to, and i quote - "get out of the building, turn left, walk down the stairs and turn right". That is about right apart from the fact that Magistrates office is about 2 miles away towards the Zoo.
You have o keep asking the shop owners how to get there. Once you inside keep on asking as there is naturally nothing there to help you point the right way. The good news is that once you have stamped your permit you are pretty much set to enter mystical kingdom of Sikkim.

You need to be at the jeep stand as early as possible. The way the system operates; when you buy a ticket you get allocated a seat. The earlier you buy the ticket the better the place you get. And in Sikkim the place you get on a 3 hour jeep ride is a big deal. We got two sits on very back and braced ourselves for the next 3 hours to Jorethang. It's a really bad road, a lot of serpentine, and some really crazy driving too.
We crossed the river and stopped at the checkpoint. At that point Dovile was about to faint, so she welcomed the break. We got of the jeep and went into the office, they checked our permits and stamped our passports just as if we were crossing an international border.
Once we arrived at Jorethang we were told that next jeep to Pelling was not until 3pm.
We went to have lunch and popped into pharmacy to buy some motion sickness pills - VOMITSTOP. That was a brilliant idea and made our life so much easier over the next two weeks.

Halfway through the ride we had to stop at a small village and were explained that the jeep broke down. Suddenly a ring of experts gathered around the jeep, with everyone taking turns at giving their expert opinion. Every passerby felt obligated to stop and chip in, which in turn would trigger a wider discussion. There was no way we were getting to Pelling that day...
Well the tides have turned. The consortium of automotive experts managed to figure out the problem. It was a wire connecting accelerator pedal that snapped. Our driver managed to pull the wire out through the front and lead it back through the front window. In this way he could accelerate by pulling the wire with his hand. I never seen a man more pleased with his engineering! And he did get us to Pelling that night after all.
We stayed at a basic hotel where the jeep dropped us off. I don't remember the name of the place but it's the first one as you enter the town. We payed 500 INR, which was a good value considering everything is slightly more expensive in Sikkim. 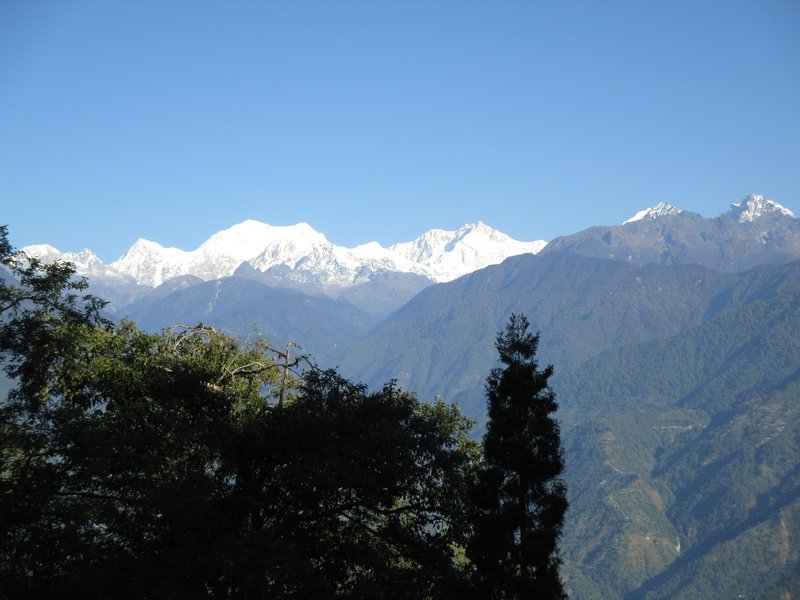 Not the worst terrace view...

The next day we set off to explore rural Sikkim by trekking 15 km towards secluded and holy Khechiberi Lake. You start by descending from Pelling towards the river. There isn't much in a way of signs or markings and maps are not supper handy either. Generally because Sikkim is so isolated and of high military importance it's not very well mapped out comparing to the rest of India or Nepal. Using the latest version of MAPS ME app that allows you pre-load offline maps is probably best. Prepare to get lost and be put back on the trail by friendly locals. 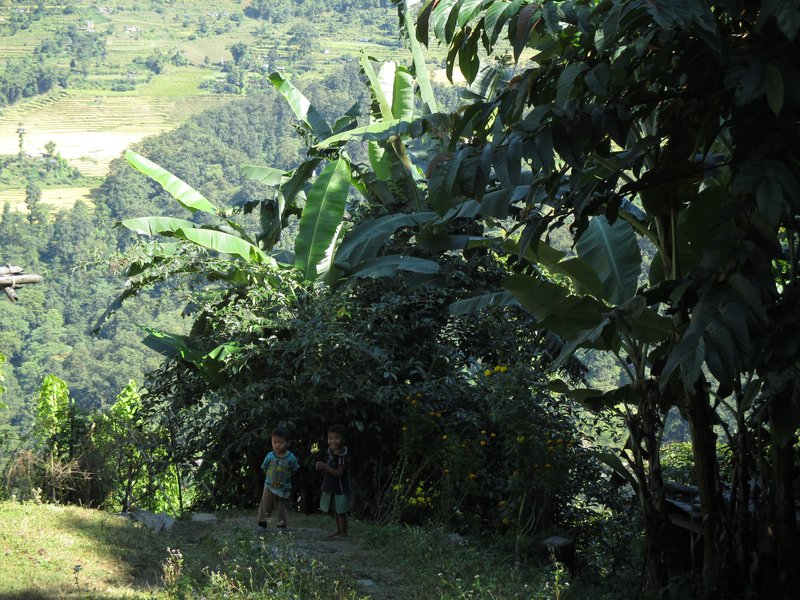 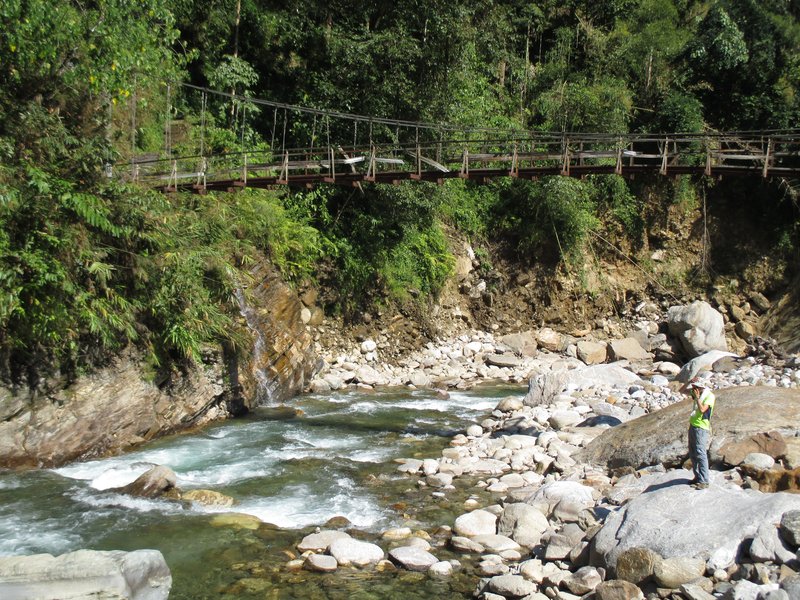 Once we crossed the river we bumped into a couple of wild orange trees where we stocked up on some under-ripe oranges.
Than we crossed a road, at which point the map told us we had to pic up a trail up through the forest. We quickly found a trail and went up just to realize that it lead to a clearing for grassing cattle. We went down, walked along the road and picked up another trail up which half an hour later got us up to a bunch of houses where we managed to find one soul who told us we were way of mark and had to go back to the road.

At this point we decided that we lost far too much time and energy trying to find that forest trail and our best bet was to follow the jeep road all the way to the lake. 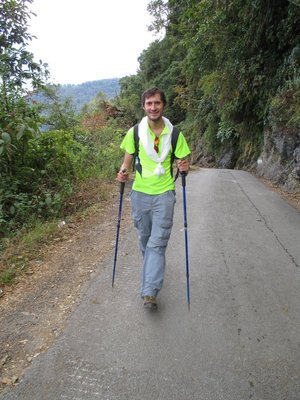 We were recommended to stay at a place called Pala's Home Stay which is located on the top of the hill on the left hand side as you approach the lake. There are a few signs pointing you to Pala's and you have to climb some steep steps for 20-30 minutes before you reach the ridge.
Pala is a super-delightful 70+ grandpa, and the place is run by his daughters.
They charge only 500 INR per person which includes all your meals. And the meals are supper delicious. 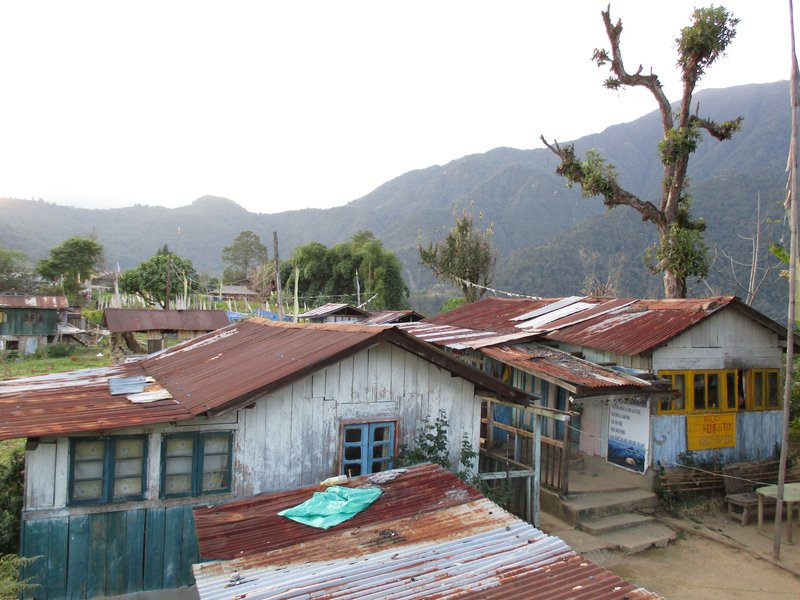 The next day we decided to stay put and explore a holy cave. The cave is located on the top of the hill overlooking Pala's place.
We walk through a very primitive village, which despite being on the top of the hill and right in the middle of Indian nowhere had a little shop and was fully electrified.
Check out this picture of a mum and a kid turning big stones into small. And you thought your childhood sucked... 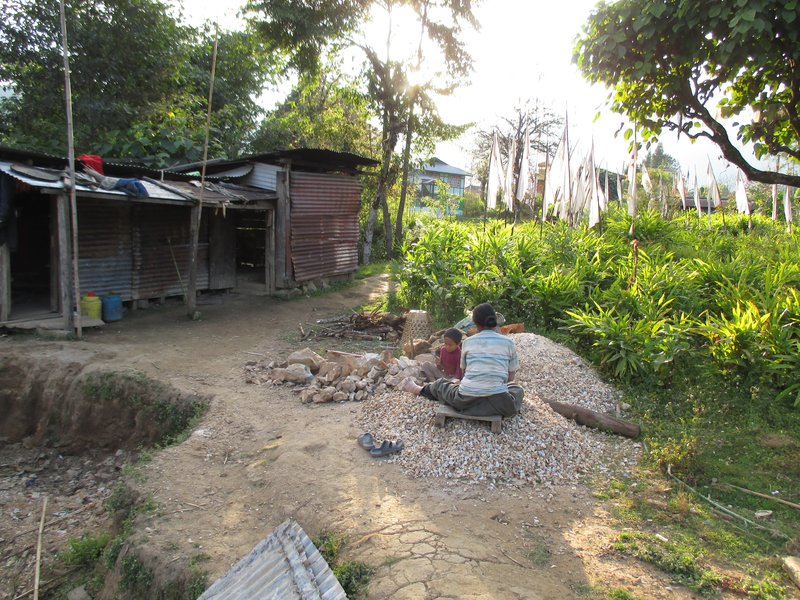 It takes about an hour to hike up to the cave. The trail is well walked and obvious. Do take plenty of water with you as you will have to walk through some very hot and humid jungle. 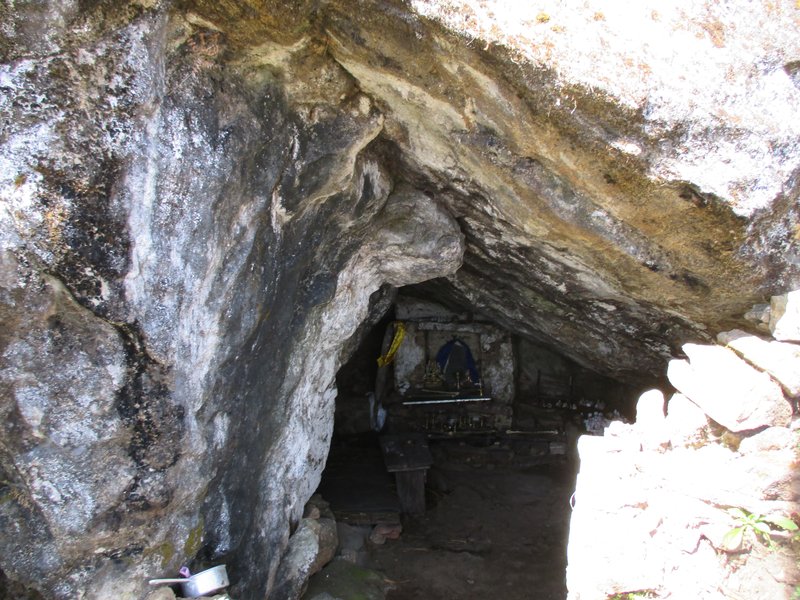 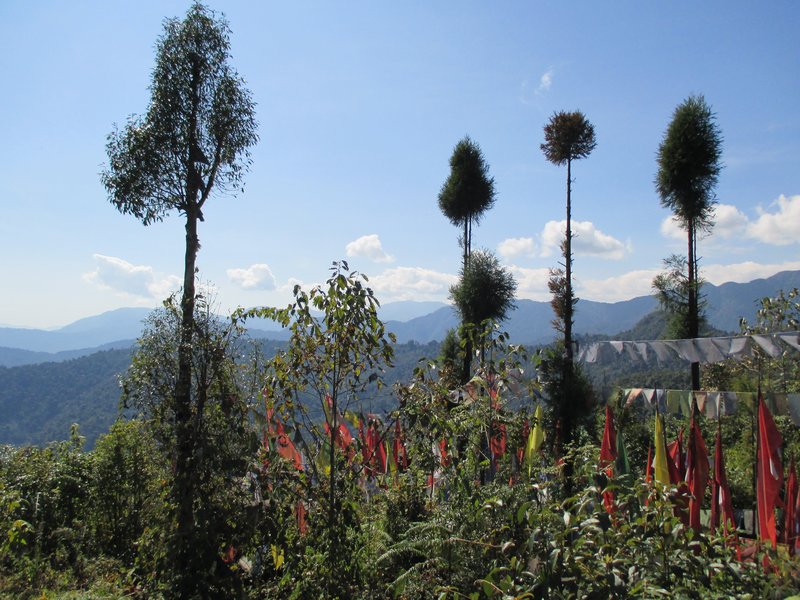 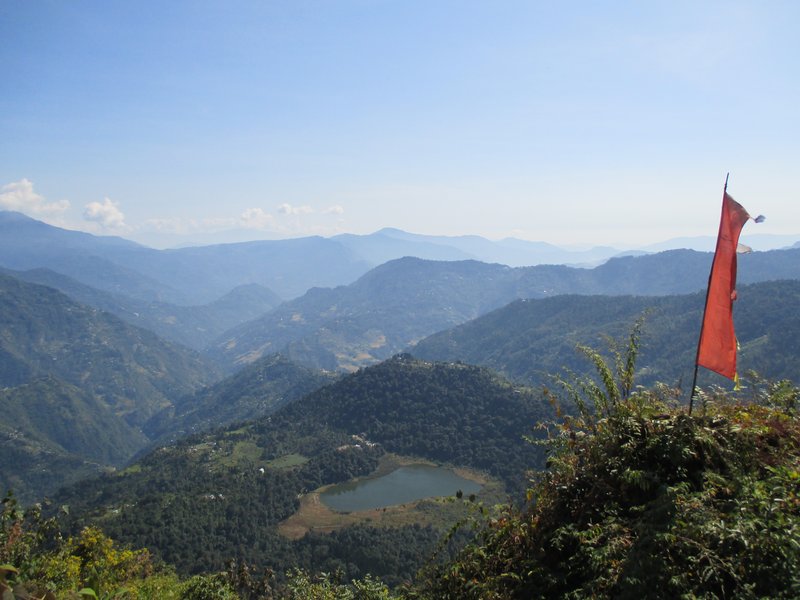 Yuksum is an ancient capital of Sikkim, place of King's coronation, major pilgrimage site and a starting point of Kanchenjunga trek. It's also as far as you can go without obtaining a special permit given only to guided groups.

It's only a 10 km hike, but it's made much difficult by the fact that the trail is not on a map and there are no signs whatsoever.

First we came down to the holy Khechiberi Lake. 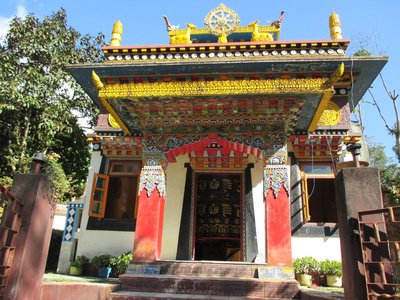 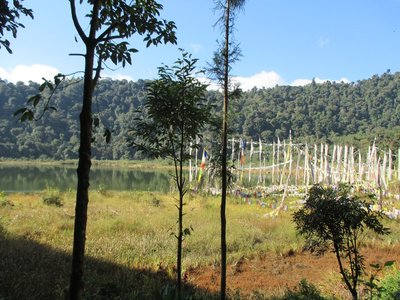 We walked on the paved road back towards the junction until we saw first and only sign on the right hand side pointing to Yuksum.
You have to follow a general bearing towards Yuksum, passing a lot of local villages and keep asking for directions. Prepare to get lost and a lot. 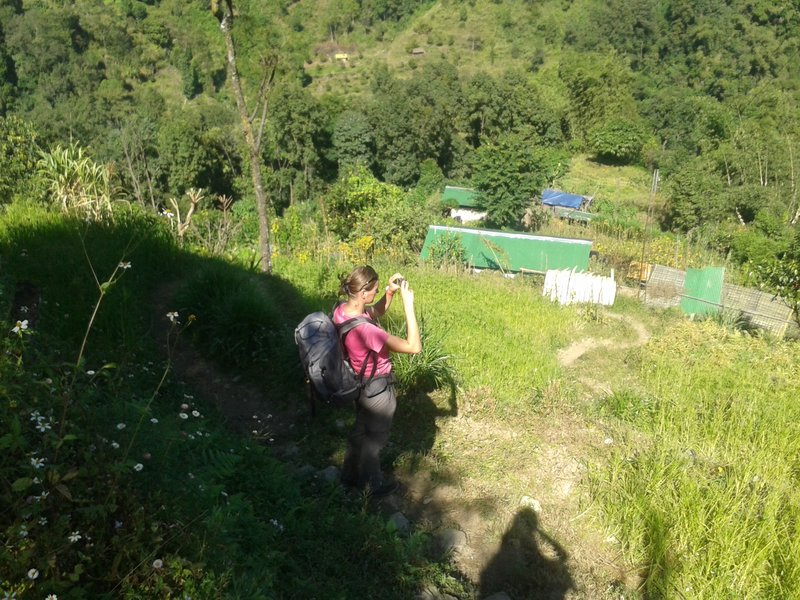 We saw a lot of boards describing various investment projects into the local infrastructure. Seems like Indian government puts a lot of money into the region to keep separatist at bay and prevent locals from looking towards China.

We reached the town by late afternoon. There are a few sights that you have to see such as coronation place, a monastery and a temple with some massive prayer drums! 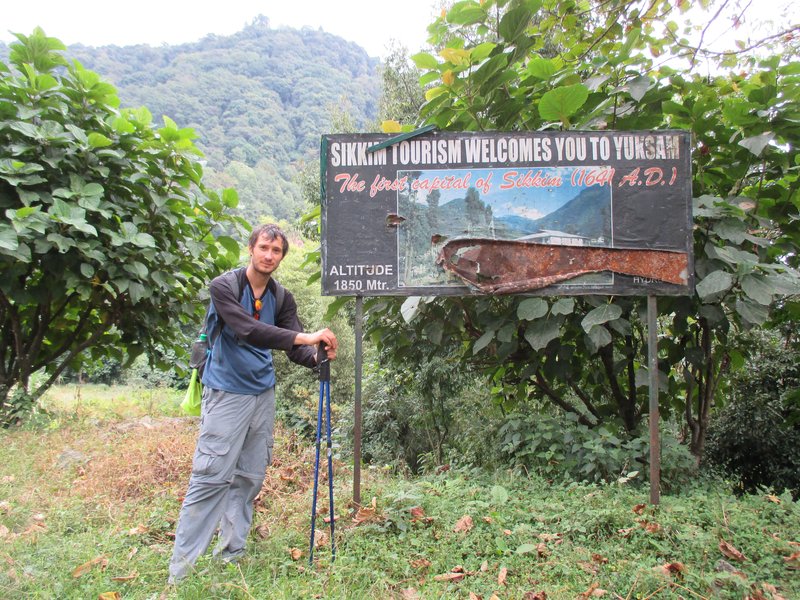 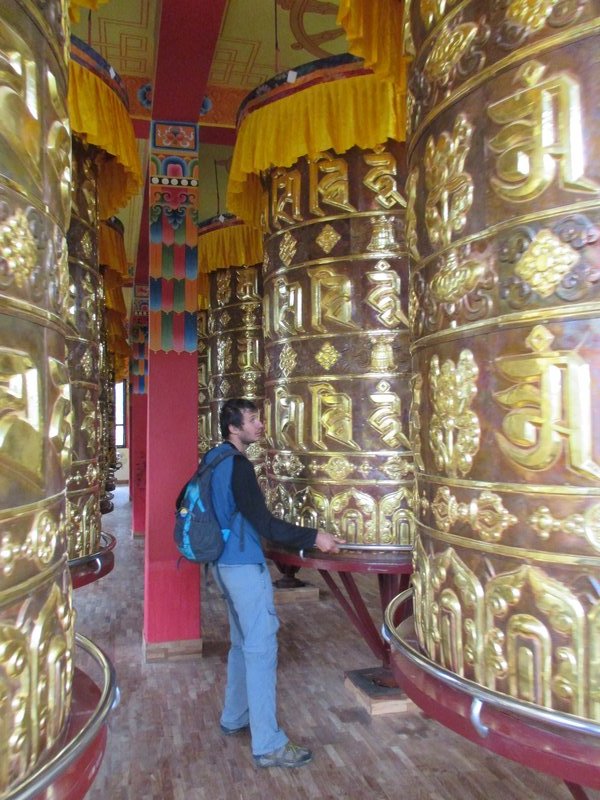