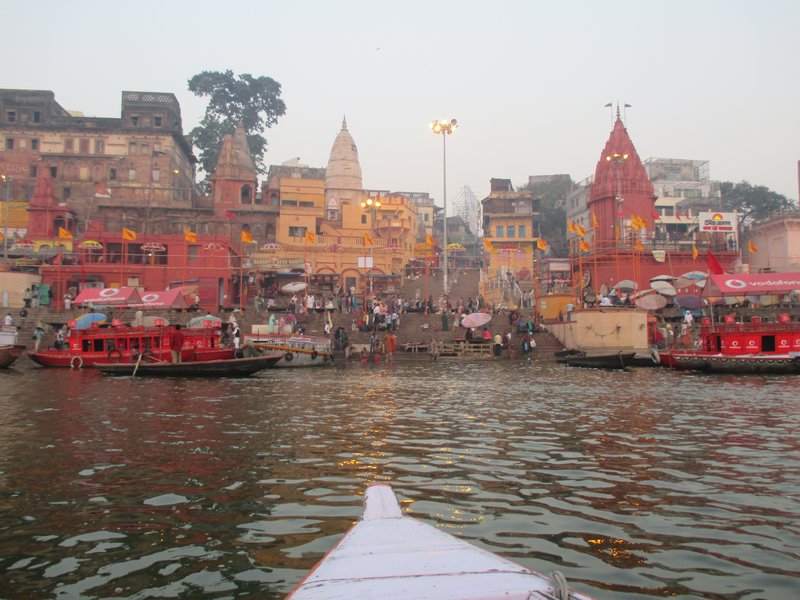 There isn't a more Indian city then Varanasi, and you feel it as soon as you step of a train. The smell, the noise, the traffic the hustle... Even after spending two months in Nepal and a month in Indian North East, Varanasi still is very much capable of giving you a culture shock.

How long should you spend in Varanasi? Well, you can stay there for ever, and some people do. But unless you are planning on going full on hippy 3 days is then optimum time that I can handle.

On my both visits to the city I chose to stay at Mushi Ghat. It's 15 minutes away from the burning ghat, hence tends to be slightly quieter. Back in 2010 there were only two guesthouses: Shiva and Baba. This days they seem to multiply and they all nested one on a top of another. This time we stayed at Shiva's, a really nice family run guest house with pretty impressive rooftop restaurant.
Cost: 550 RS for a double, with a bit of bargaining. 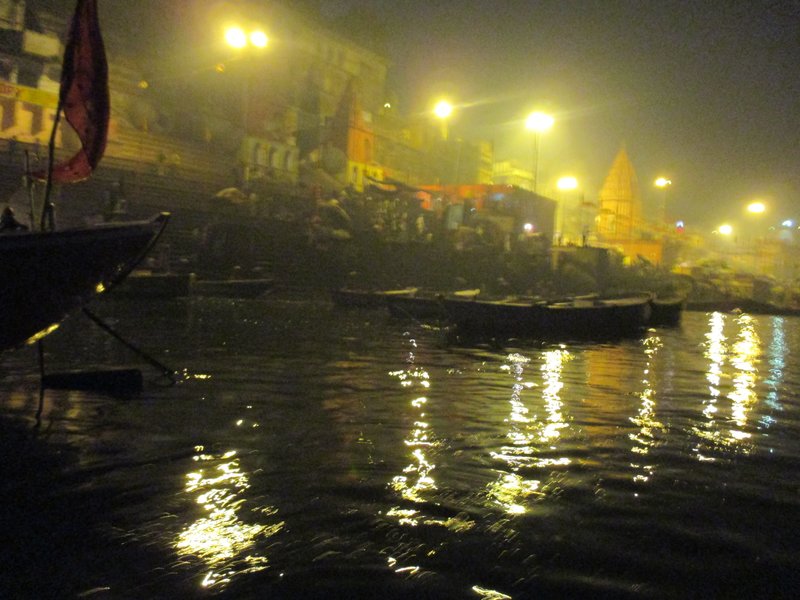 Having a boat cruse on Ganges at sunrise is an absolute must and an essential part of everybody's visit.
There are plenty of people who will try to sell you the ride, including your guest house owner. As usual the best thing is to just show up at about 5 am at the Ghats and negotiate with a boatman. Actually someone who pretends to be a boatman, who will pass you on to another fake-boatman and at the end you will end up with this young captain. I named him Andrew after my nephew. 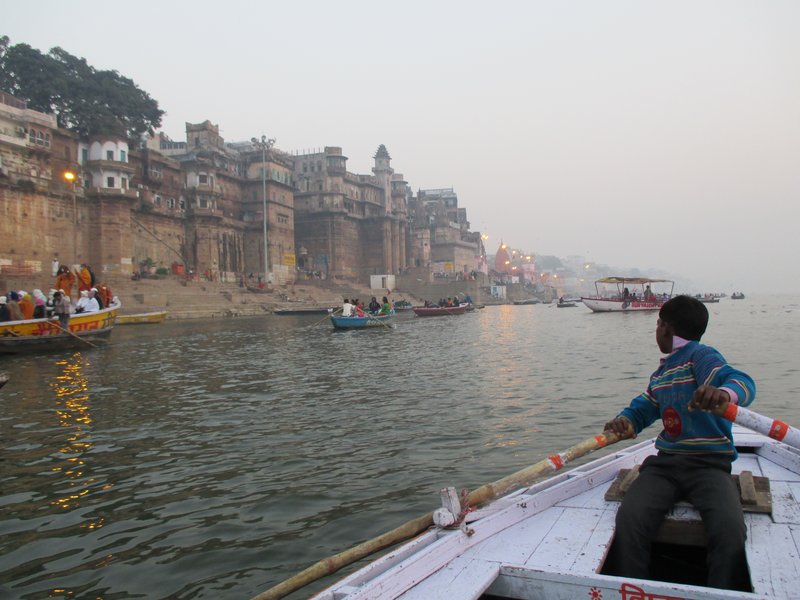 We have negotiated 200 RS per hour and agreed for a two hour trip. You can keep the cost down by finding more people at the ghats and shearing with them. Don't go for any per person fees, agree the entire amount in advance.

The ride takes you over to the new modern Crematorium, burning ghat, sunk castle and back. The best thing about the boat ride, is that you get to observe daily life going by in the ghats. You see people going for dip just few meters away from body remains and what not being dumped, and right next door there is a "shitting ghat" where everyone goes, well for a holy morning shit. Everything looks so chaotic and yet perfectly organic. 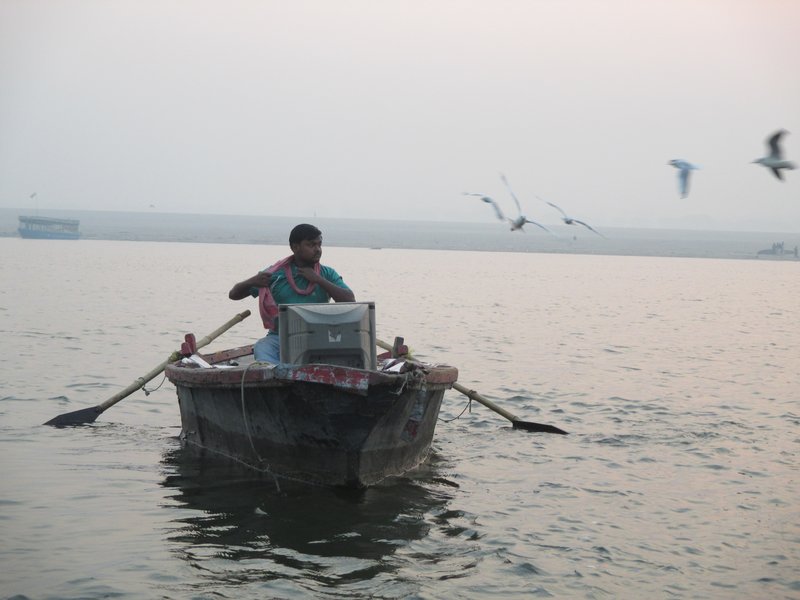 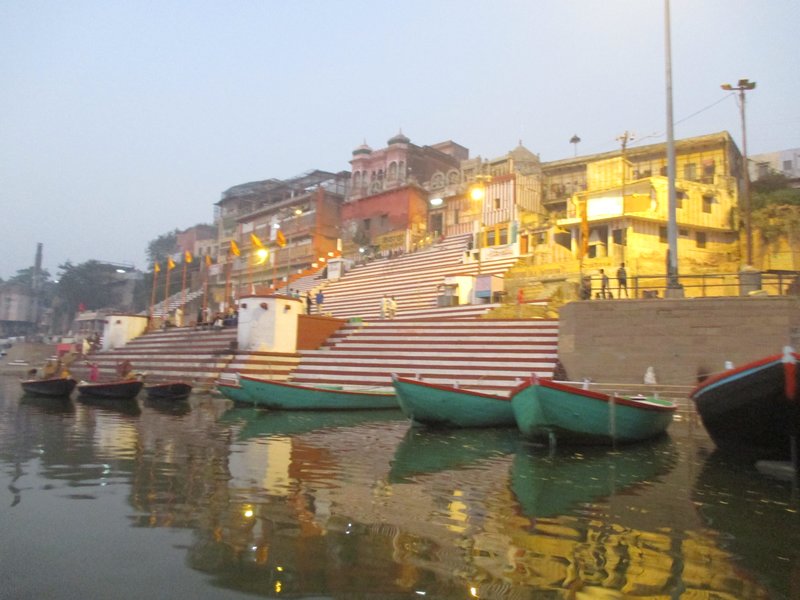 Ghats
This is the prime reason you came to Varanasi, the city's life revolves around the Ganges or the holy mother as it's often refereed to. My personal favorite is the laundry ghat. 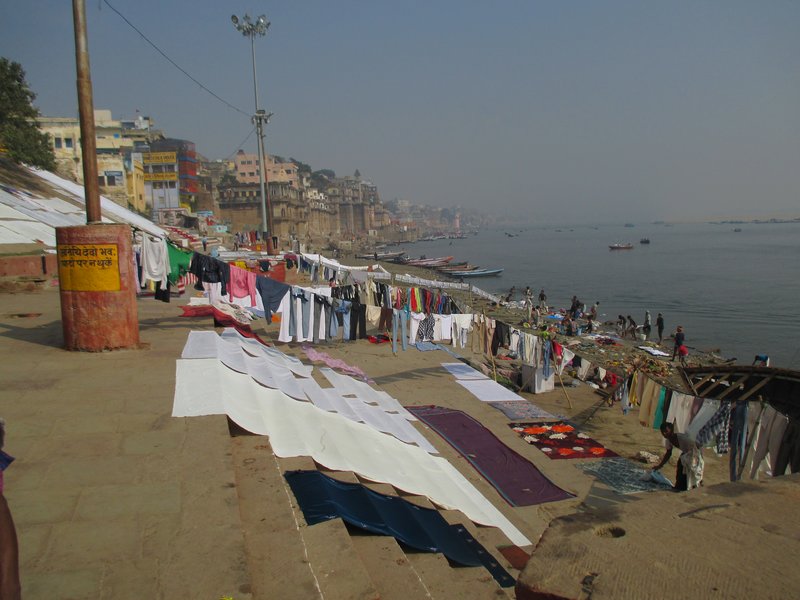 The handshakes. I must say I fell for this one on my first visit. Some dude tries to say hello and shake your hand. The handshake seamlessly transforms into a hand massage. Then before you know some other dude starts to massage your shoulders, and the show goes on... 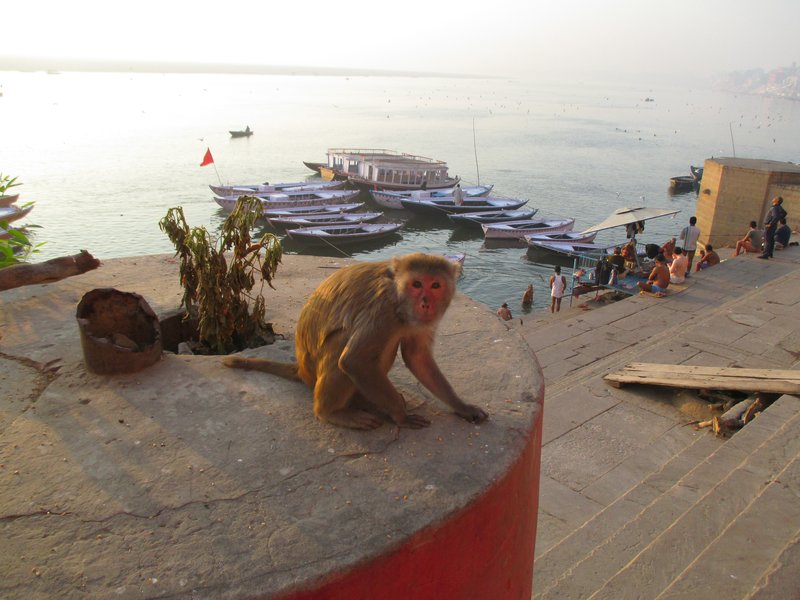 Night Show
Every night a show is performed at the main ghat as a thanks to mother Ganges. A good hour spent, especially watching the tourists. I dveloped a new hobby - taking pictures of tourists who are taking pictures. 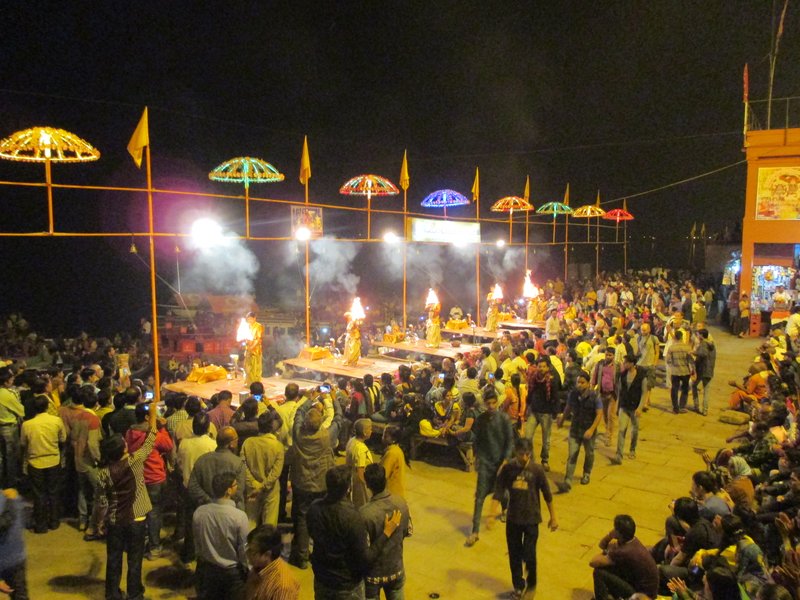 Banaras University
A very impressive complex which looks like a maze of campuses, alleyways and living quarter. You only need a couple of hours for your visit. Just grab some food and have a picnic in one of the parts. Sure as hell you will soon find a bunch of students hanging around you eager to have a conversation.

Burning is for Learning, Cremation for Education. When we went to see the burning ghats up close we were approached by one of the "workers" (expected) who really wanted to tell us all about the ghats the process and so on. We didn't fob him off right away because we actually wanted to listen and wanted to see where this will take us. He kept repeating Burning is for Learning, Cremation for Education which although rimes really doesn't make any sense.
Apparently that guy works for charity (who else?) which helps poor people who can't afford the fees to get cremated in the holiest of all places. One can only be cremated using sandalwood, which is priced at 3000 rs per kilo. This is the part where I struggled to hold my smile back. Sure as hell the guy asked us how many kilos of sandalwood we would like to donate! I like the sales pitch, don't mention the money, it's all about the holy wood :-). We managed to get away with 50 rs which I think his story was worth. And to say the least he didn't back down easily. We actually found ourselves running trying to loose the guy in the street maze. 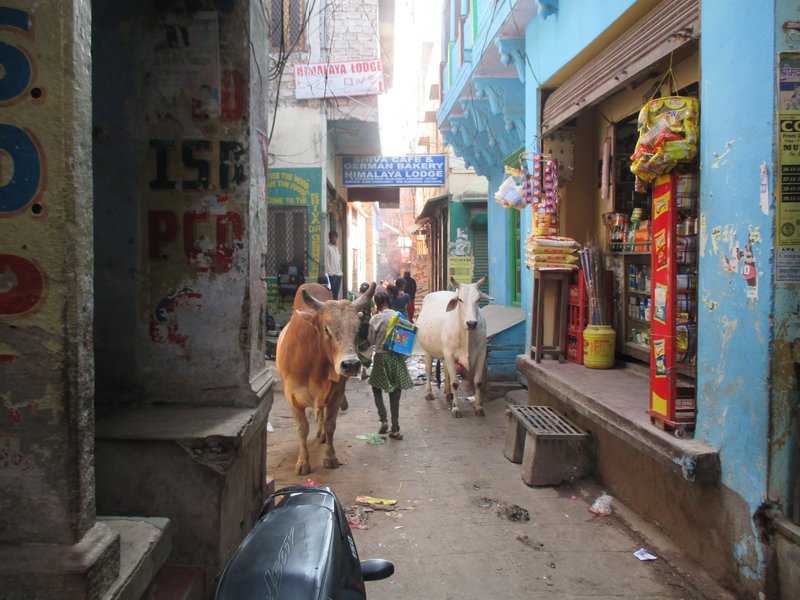 Sarnath - the place where lord Buddha gave his first preaching upon enlightenment.
This is actually a very good day out. The place is somewhat similar to Lumbini - Buddhas birth place in Nepal.
There are a lot of tuk tuk drivers who are willing to take you there for 500-600 Rs for a day trip, which is a rip off taking into account the place i only 13 km away. You can catch a van to Sarnath from the main road parallel to the train station, the price is 30 RS, but prepared to be ripped off, you are in Varanasi after all, being ripped off is a noble thing to do - creates job places.
After you visit the Stupa, there is a network of temples around from every Buddhist country. My personal favorite is Japan. 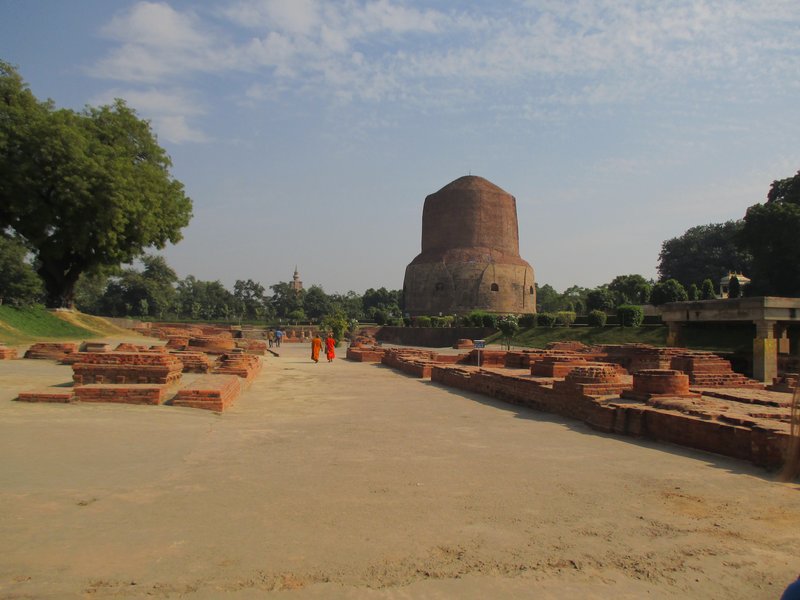 These women are clipping grass with scissors, and your though your job sucked... 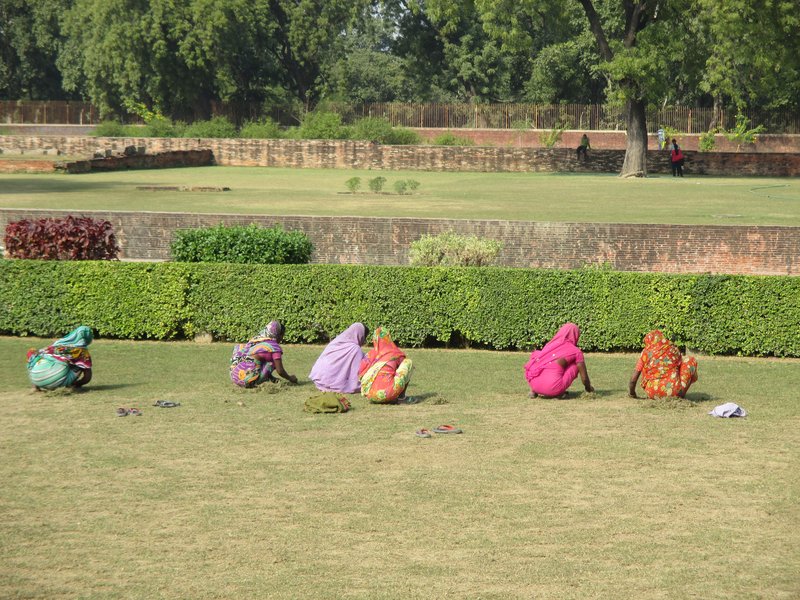