Tackling the highest peak in Spain!

Normally when you think of Tenerife or Canary Islands you think of a beach, a pool and an all inclusive resort. Needles to say this is not out theme...
However, Tenerife is also a home to the mighty el Teide - Spain's highest mountain at 3,718 m.
Teide is a very special mountain as it's on an island its prominence equals its altitude. You can standby the pool wearing a tea-shirt and observe a snow-capped peak. Hence it was only natural that for our winter break in Europe we decided to pick Tenerife and take on Teide.

Teide is open to climb all year round. In summer it gets unbearably hot and in winter it's often covered in snow. You can do it the easy way and take a cable car practically to the top, than you need a permit (arrange in advance on-line) to climb the last 100 m to the actual summit. Well that is the easy way.
Our plan was to hike it up in two days with an overnight stay in Altavista refuge @ €25. Don't fool yourself thinking it's Canaries, Teide is a 3,718 m. mountain and you have to deal with some serious weather in winter. Well this is where we got lucky this time. It sowed heavily in January, the roads were closed for a couple of weeks and were just cleared for our adventure.

Transport: There is a bus going along TF1, it reaches foothill station (from Las Americas side) in early afternoon and than goes in the opposite direction at around 4 pm. I guess you could use it, but this would mean starting your first day pretty late and than hanging out waiting for the bus on the way down.
Most convenient and cost effective way is to drive up. We hired a car for about €100 per week.
Permit: If you stay in the Altavista and get up and down before the cable car starts operating there is no need for permit.

It takes from 1 to 1,5 hours to make the journey, mostly because of sharp curves and steep ascent that you will struggle to tackle in your economy rental car. Once you reach the cable car station carry on for a kilometer or two until the next parking lot where the trail starts. 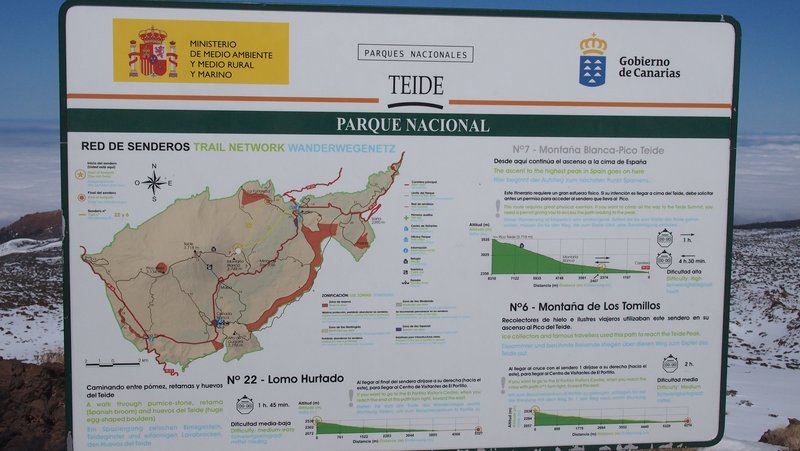 On your way don't mind the idiot who think it's a good idea to stop at the middle of a narrow road for a photo opp.

First thing that surprised us is the number of people in Tenerife who own skies and snowboards. 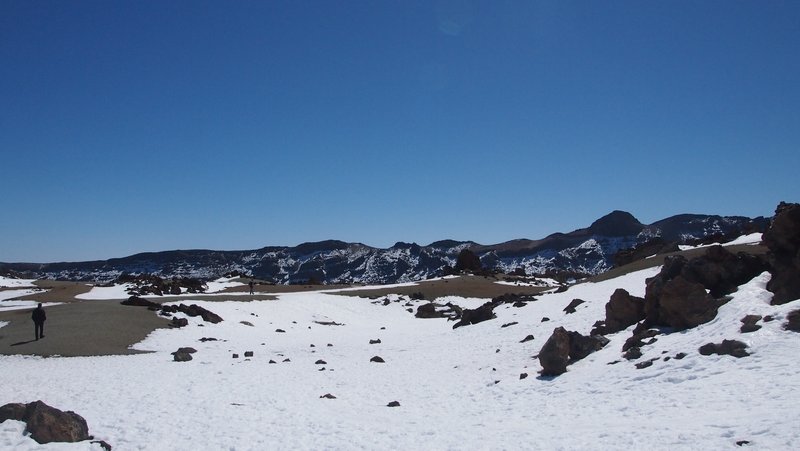 It could get confusing at the beginning s there are a few jeep tracks, but they eventually all meet, and if in doubt just take the turns towards Teide.

It's a bit of a steep ascent and we had to alternate from snow to scree which takes additional energy and stamina to keep up pace. 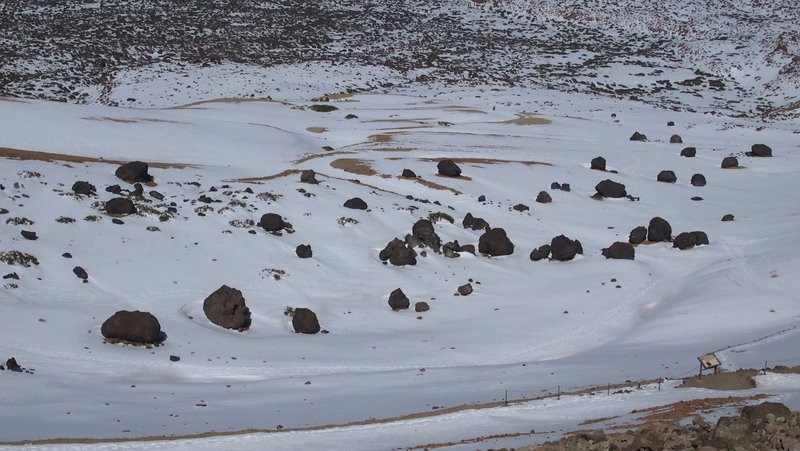 These boulders are lava bolls, Teide is still an active volcano. Once we past them we had to take a steep trail up, the snow got knee deep and we drop our pace. We met a few guys who went up on a cable car and now were jogging down in shirts and flipflops :-).
We were just happy to have a nice sunny day! 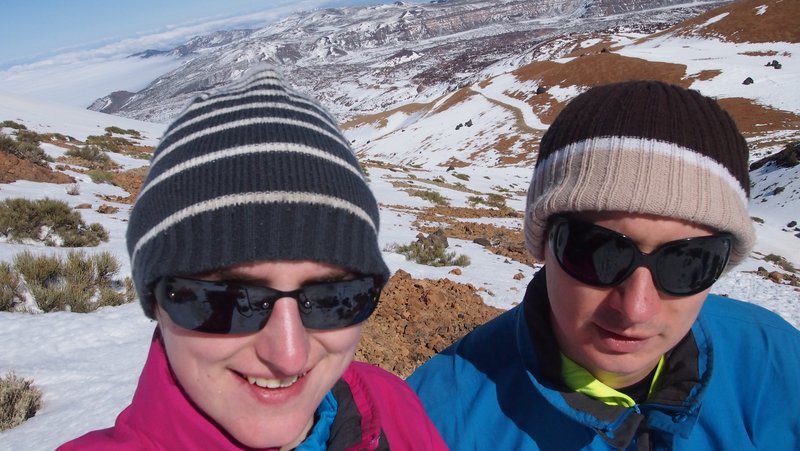 It took us about 5 hours to ascent 1000 m. and reach Altavista. Last 30 min gets hard as you start to feel altitude at 3000 meter mark.
Altavista is a simple but solid refuge they provide hot water and have an expensive snack vending machine. The dorms are small and can get claustrophobic, but they are well heated.
We had a dinner of some oranges and pot noodles (you can boil water there), and were off to bed.
You have to wake up at 2 am to have breakfast change into winter gear and put on crampons.

At the top temperature was around -5C, but the wind chill factor took it down to -15 - -20C. We were wearing thermal layers, our skiing trousers and jackets, skiing gloves and I had a balaclava, which is a great thing to keep you warm at night. Basically you have to be kited out rather more than less and treat it as seriously as you would a similar mountain in Alps. 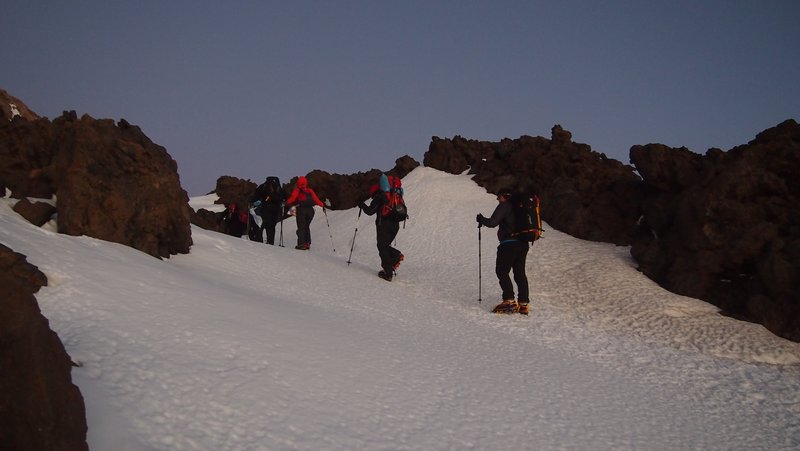 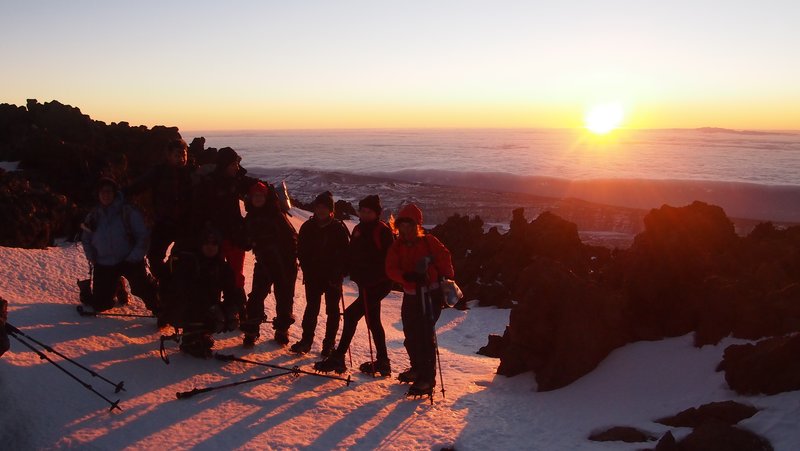 We joined a caravan of Spanish climbers, put our head-lamps on a headed out. There isn't a trail really, may be there is one in the summer. But frozen snow and crampons make it quite easy to move in pretty much any direction. If you lucky and the day is crisp you get an amazing sunset. 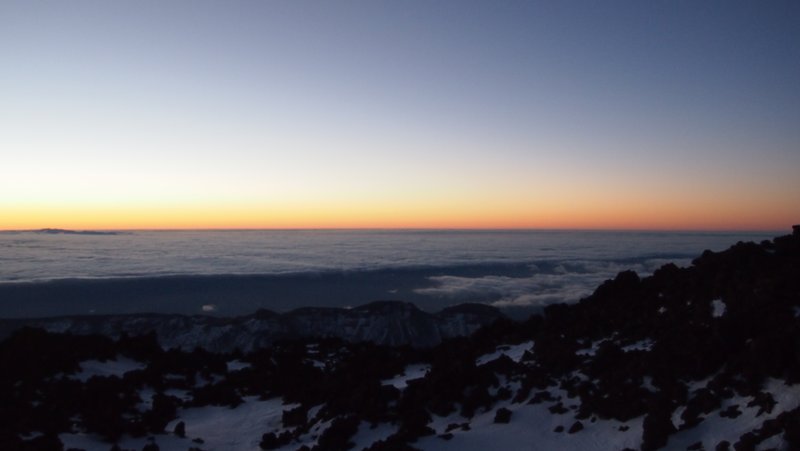 As we came to about 200 m below the summit we had to traverse the peak on what is to put it simply: a very steep sheet of ice. This is where your crampons save your life, and it's not a bad idea to have an ice-pick too. Well since none of us used an ice-pick before we decided that it's safe not to have it and risk taking your own head of.

The very top of Teide is actually free of ice, hence you have to take your crampons off. This is because Teide is still active and there are steam vents which let out some really toxic gasses. Sulfur smells like rotten eggs and made us feel a bit sick, it's not too bad just don't stay over a piping vent.

It's a beautiful feeling to be on the top of the world at sunrise. 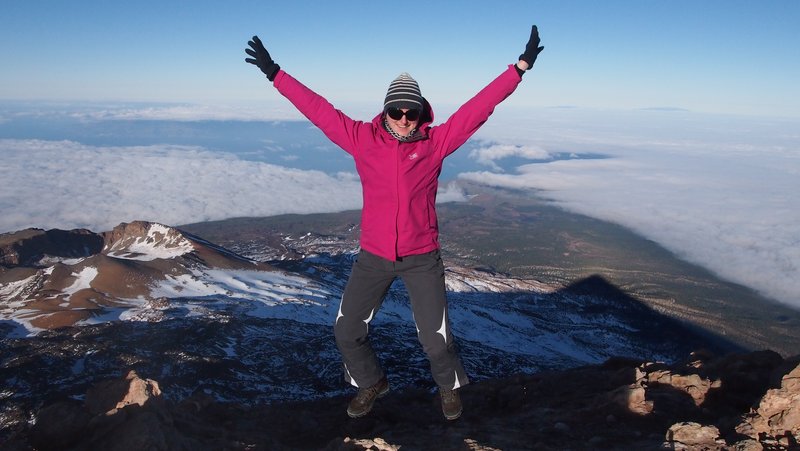 And it was Dovile's birthday too! So we cracked up a small bottle of champagne and enjoyed the views over the endless clouds and peak Viejo's crater below. 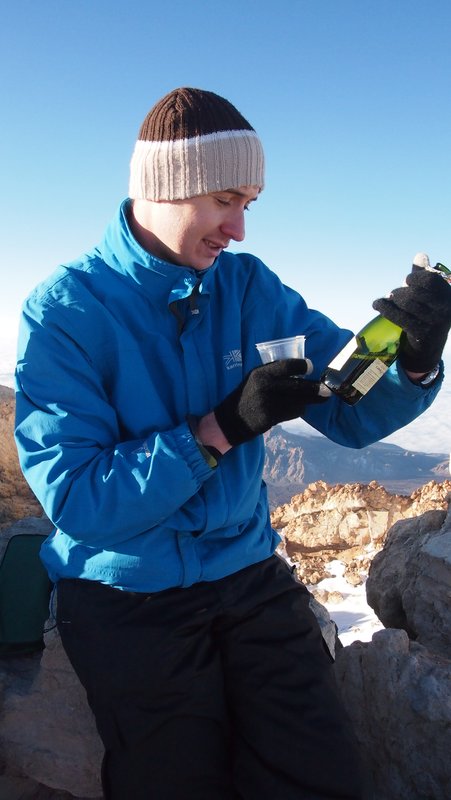 4 hours down and by early afternoon we were drinking cold beer, taking a dip in Jacuzzi and basking in sunshine. 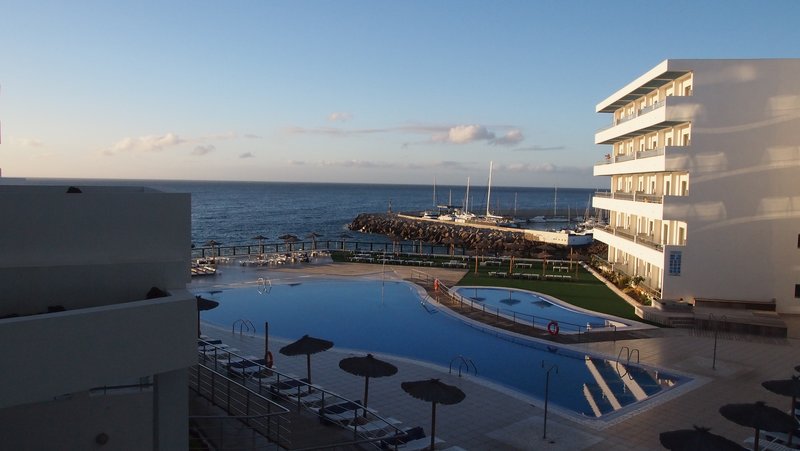 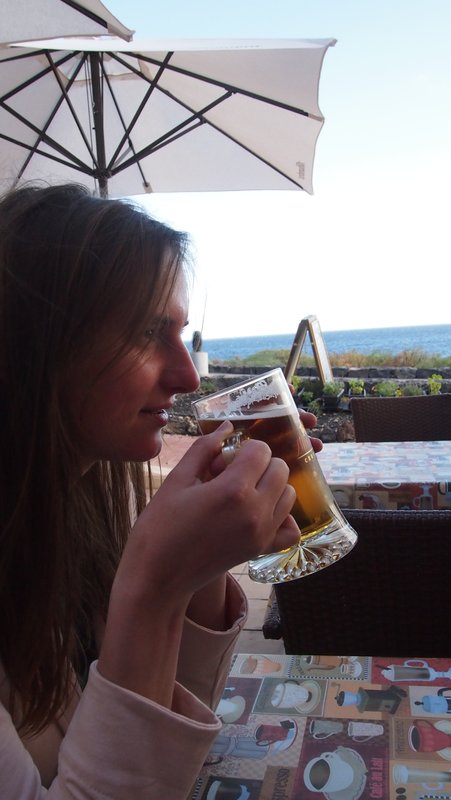