Why I love this city

Delhi was the place of my first encounter with India back in 2008. I remember experiencing a culture shock while taking a taxi from the airport to a hotel. The noise, the smell, the traffic - the Incredible India. Right at that moment I said to myself that I will go back to this amazing country.
Having said that, I'm probably the only person who actually rates Delhi as his favorite city in India if not in the world.
This post is about what you can do in Delhi besides waiting for your next train and not go crazy from the hustle of one of the world's largest mega-cities. 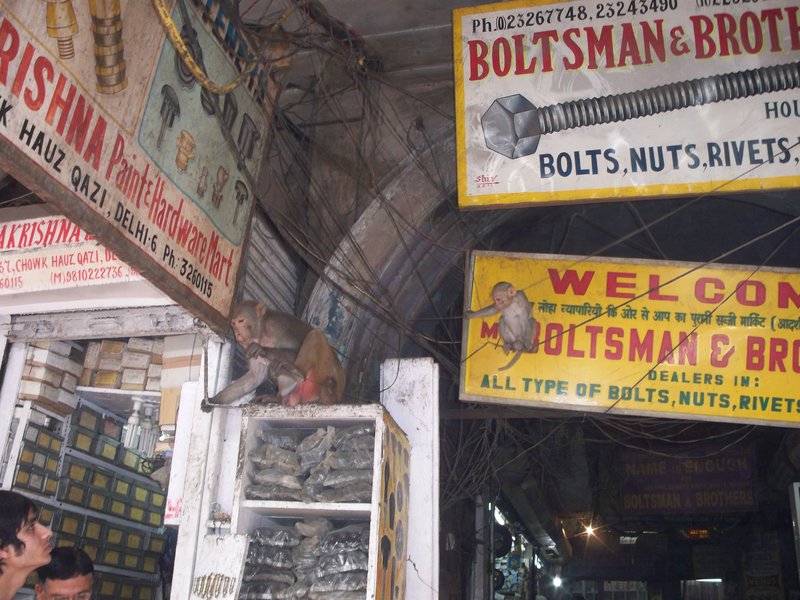 The chances are you are staying either at Karol Bagh or Main Bazar Road right at the heart of the old town and across a rail track from the full-on madness of Old Delhi.

Hence, a good idea for your first day is to familiarize yourself with the area, and absorb Delhi atmosphere. Both Karol Bagh and Main Bazar Rd are actually quite stress free, even the shops and markets tend to have fixed prices. This is because there are so many backpackers, who all developed sick skin and are naturally quite opposed to all forms of hassle at the area where they stay. Well there are plenty of other places to be hassled...

Once you are ready cross the train tracks at New Daily station and go over to the heart of Old Delhi. This is a totally different scene. Prepare to be attacked from all sides. There will be overly keen rickshaws who will be eager to give you an hour long cycle tour, show you spice bazar, etc for 20 rs each! Bargain!
This is of course is a scam you will end up being taken from stall to stall where you will be hard pressed to buy all sort of useless crap. Having said that, if you have the time, know what is happening and have sick skin, then it can be well entertaining and you are guaranteed to finish a day with a story to tell.

Right in the center of the Old Delhi there is Jama Masjid, pretty much everyone can point in you in the right direction and you are still guaranteed to get lost several times.
Jama Masjid is one of the greatest mosques and is claimed to be the second largest by capacity (after the one in Mecca).
Well it is great, there is no doubt about it. At entry to a mosque free, they need to make their money somehow, so they apply a 250 rs camera charge which of course includes mobile phones. You can of-course argue that all the Indians go in with their phones and no one seems to pay, but really save your breath pay 250 rs for one camera/phone among however many of you and enjoy the place. 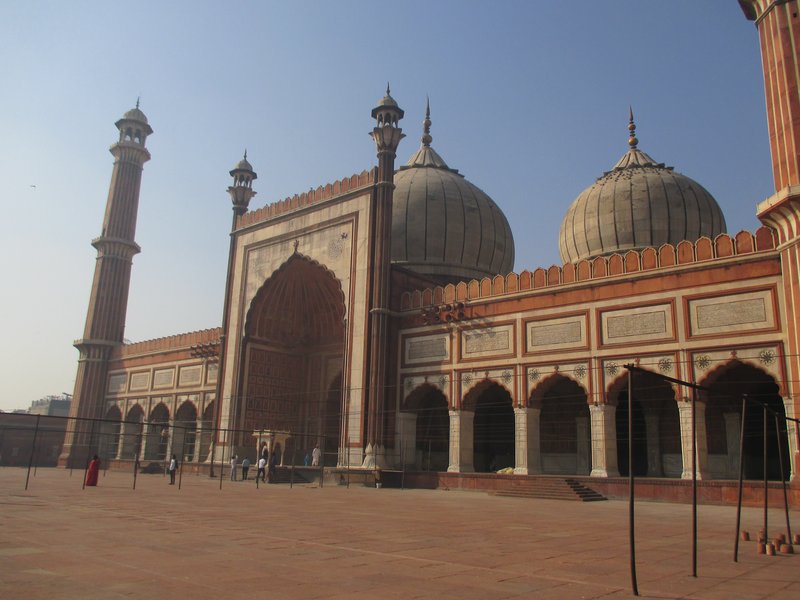 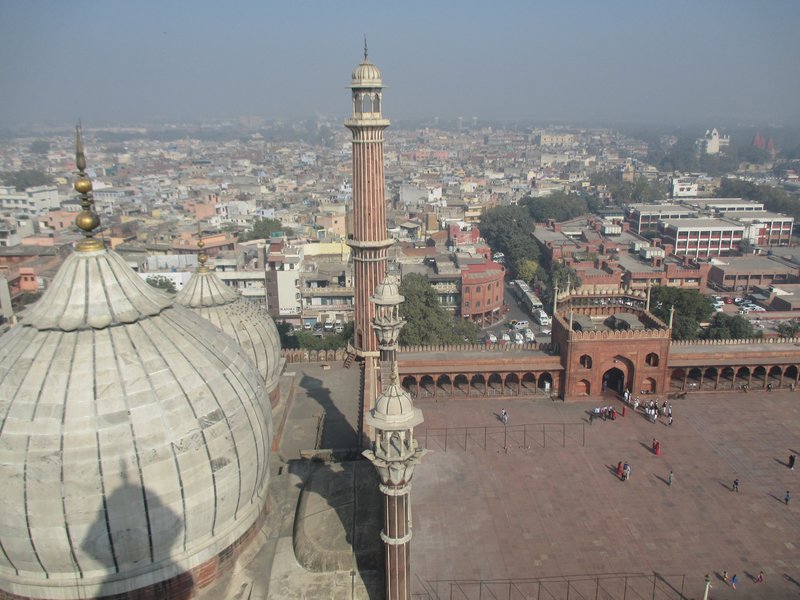 I highly recommend climbing a minaret right to the top for spectacular views over the old town. 100 rs.

The second stop is Red Fort. 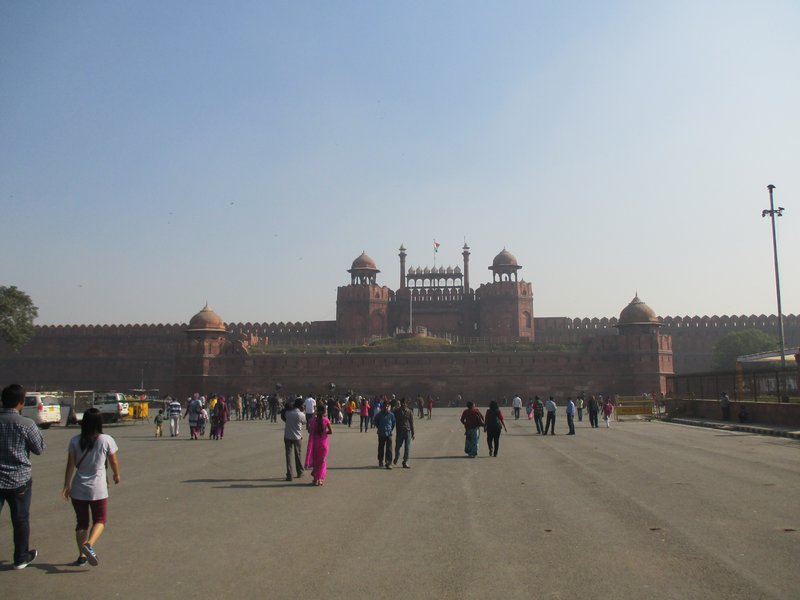 This is a place you go to if you are eager for local's to come and ask you to take pictures with them, over and over and over and over.....
The fort itself looks better from outside than inside (IMHO). If you decide to go in wait till the evening and go for a night lights show. 250 rs.

By this point you are probably well tired and hopefully somewhat acclimatized to the Delhi atmosphere.

For a sake of contrast this is a good day to dedicate to New Delhi as in new side of Delhi.
Since this is where you will have to take Rickshaws it's worth to talk about coupon system. 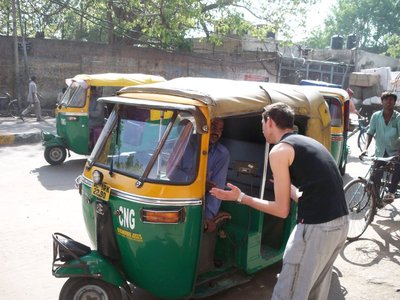 To be fair this doesn't happen now as much as 10 years ago when coupons were Delhi's leitmotif. Rickshaws will be eager to take you anywhere for as little as 20 rs, the catch is that they will also take you to several shops on the way. The way the system works is when a driver brings a client to a shop that get a coupon which entitles them to something from the shop. This is regardless of whether you buy anything or not. The main problem is that they try to lure you in the whole coupon thing, you feel being out of control and don't know what comes next and when the whole experience is going to end. In some cases drivers are quite upfront about coupons and it's a part of negotiations when you can agree for a ride for X price + 2 coupons for example.

To start with you can take a metro ride or walk to Connaught Place or CP. CP is a large roundabout that features modrn restaurants and shops, it's not much in itself but provides a bit of a breather from the suffocation of old town.

From CP it's quite easy walk to the India Gate. Check out the wasp nests right under the roof! 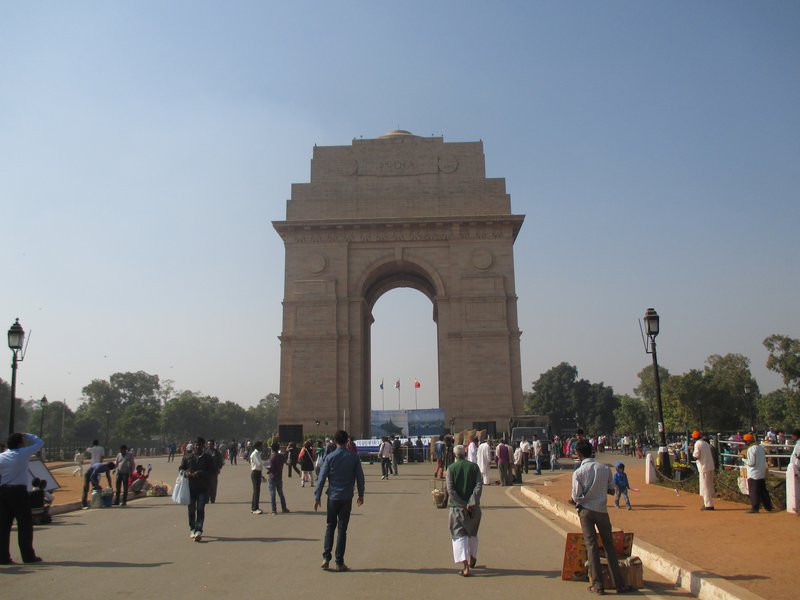 From here it's about a one mile walk to the presidential Palace down the Rajpath. This part can be more fun than it sounds... mostly thanks to over entrepreneurial rickshaw drivers. They will see you as an easy prey with literally nowhere to run (as you have a 20 min walk in-front of you) and offer you a tour... After you told them a 1000 times that you know what you are doing and don't need any help, they are likely to offer to give you a quick lift to presidential palace for like 10 rs, well why not? it's a hot day after all... Well... once you are in the auto the whole tour sales pitch starts again... hang on - I told you "no thanks" you told me "understood no problem", why are we having this conversation again???? 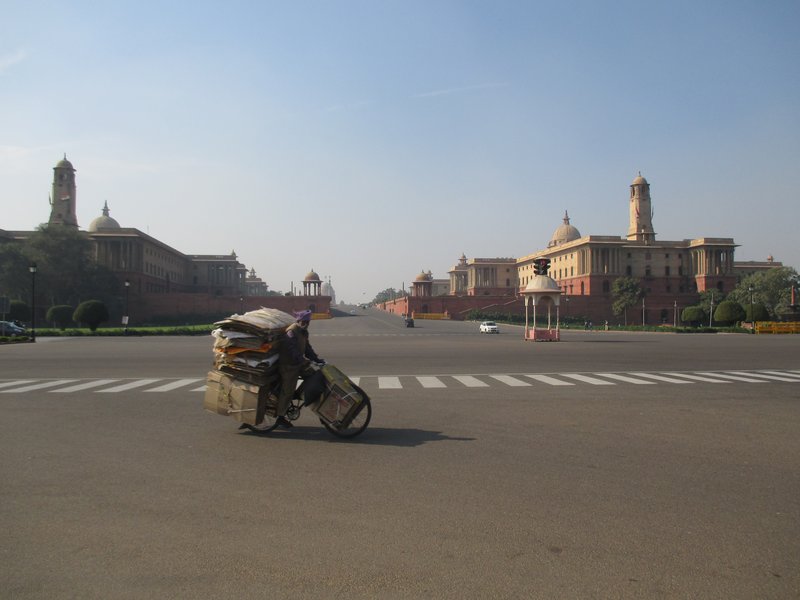 You can't actually enter the palace, but like most of the things in India they look better from outside than inside... 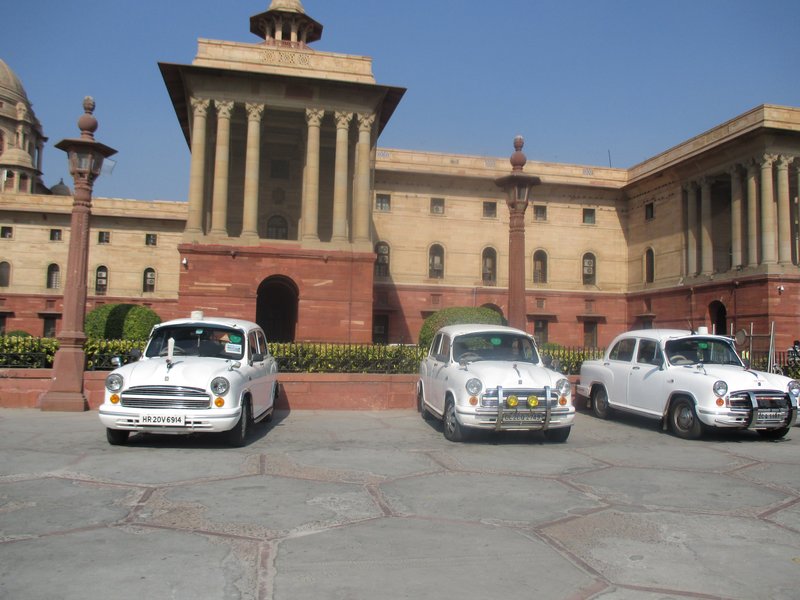 The next place to visit is Ghandi Smriti, a memorial house where Ghandi was assassinated. It's an easy 20 min walk, and if you managed to find it on a map than my advise would be to walk it. Otherwise it's a no more than 50 rs metered ride, with only problem than no one will want to use a meter will quote you 200 rs and will ultimately try to sell you a day tour. 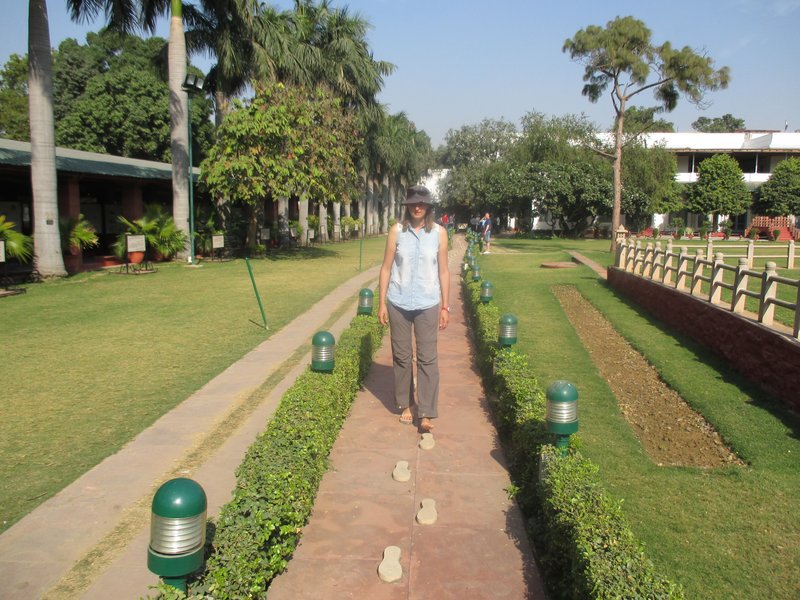 Ghandi Smiriti is a very calm a peaceful place, there is a nice park and a lot of information about Ghandi's life and death. You should spend some time going through the house and reading up on the Indian's transition to independence. It's amazing to see Ghandi's room, how basic it was. The guy had a billion people nation behind him and he still kept to his basics and didn't become corrupt by power and money that come with the job. 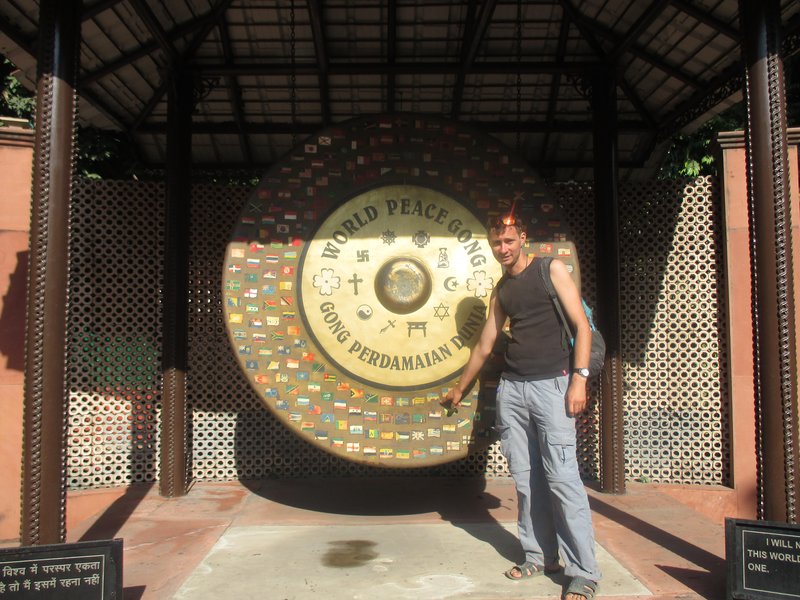 Humayun's Tomb - a massive complex which is a burial place of several monarchs across multiple generations. While not being made of brilliant white marble it's a more important historical site and a much grander structure than Taj Mahal.

You can get there by taking a Metro to JLN Stadium and doing a short walk. This is best done in the morning as this is a popular site for Indians and tourists alike. You will need at least 2-3 hours to fully explore the grounds.

Than take a metro Qutub Minar. Actually you should take metro in Delhi just for a sake of it. And check out this list of Dont's... 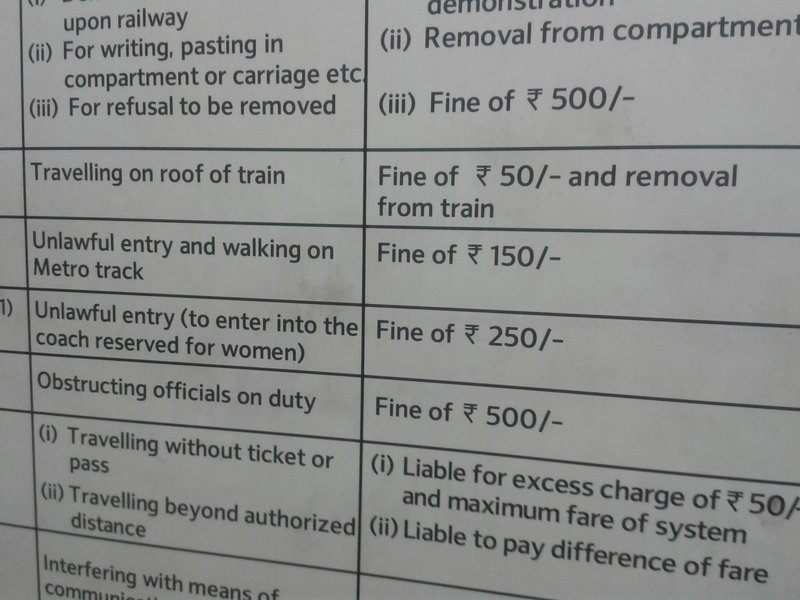 My favorite is obviously - riding on the top of the train. 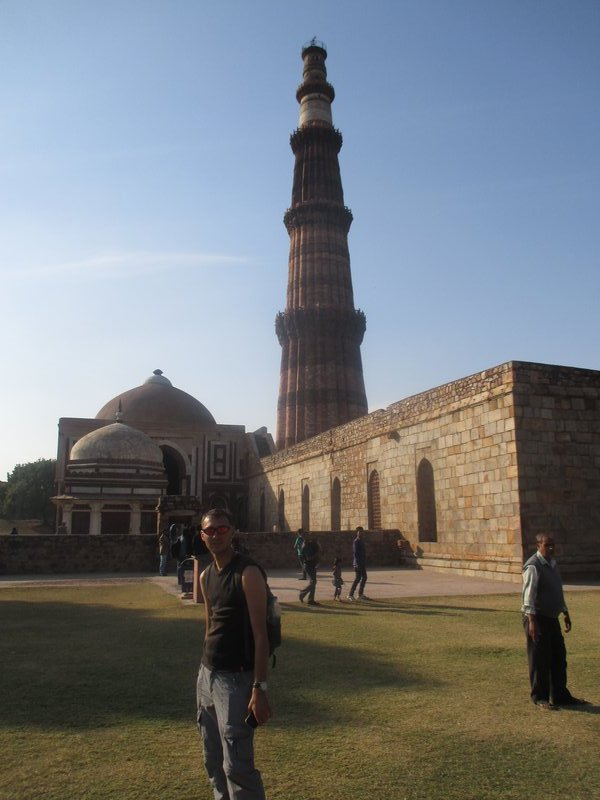 This is an impressive site, but like everywhere else tends to get very busy with locals who all are too eager to take a picture with you. So just be ready for it. 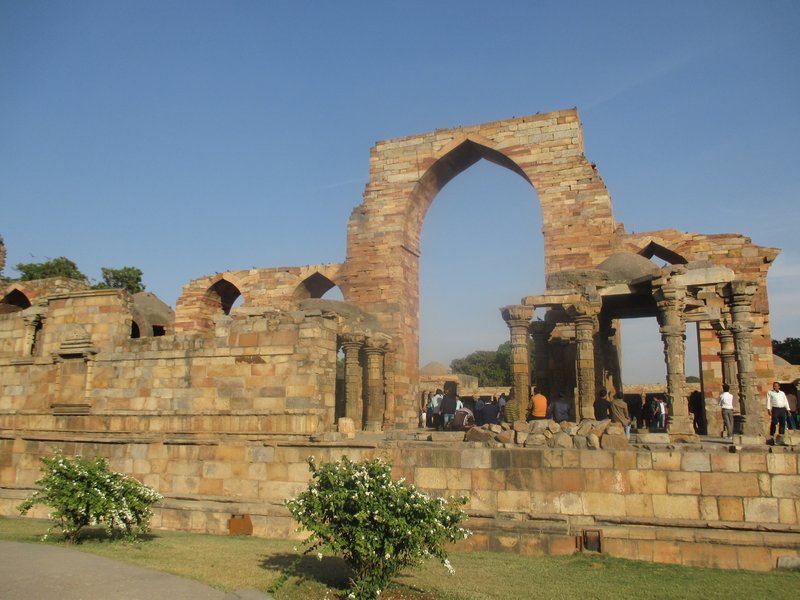 Once you done in Qutub Minar you can go to Lotus Temple which is located also in South Delhi. Negotiate with a rickshaw for about 150 rs, it's a long ride along a motorway which makes it a bit scary.

Lotus Temple or Bahá'í House of Worship is a unique place.
From Wikipedia
he Lotus Temple is open to all, regardless of religion, or any other distinction, as emphasised in Bahá'í texts. The Bahá'í laws emphasise that the spirit of the House of Worship be that it is a gathering place where people of all religions may worship God without denominational restrictions.[6] The Bahá'í laws also stipulate that not only the holy scriptures of the Bahá'í Faith but also those of other religions can be read and/or chanted inside the House of Worship regardless of language; while readings and prayers can be set to music by choirs, no musical instruments can be played inside. Furthermore, no sermons can be delivered, and there can be no ritualistic ceremonies practised. 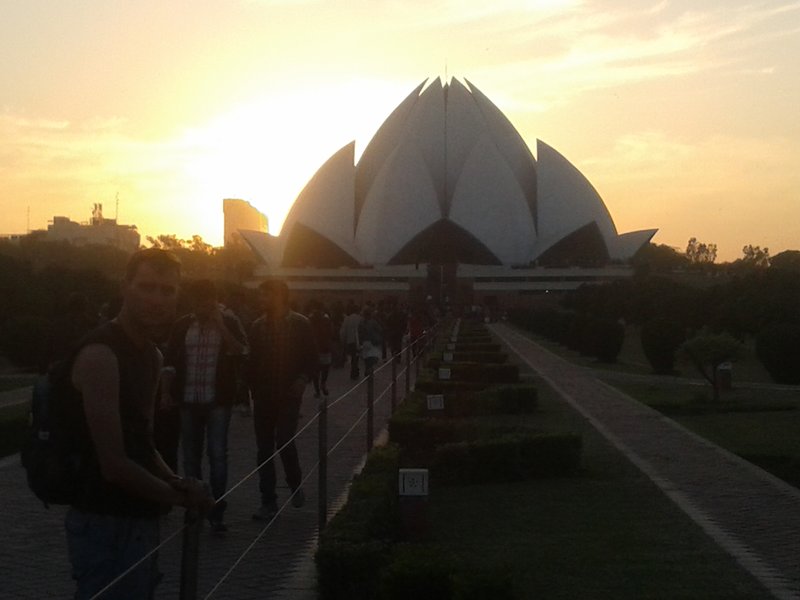 When you arrive prepare to be shocked by a queue which stretches around half a mile and that's outside the gates. Don't be alarmed the queue moves very quickly, we arrived at the end of the day and thought we wouldn't make it but were inside in 30 min.

Inside setting is very plane, most people come in just to look at the temple, a few stay for a while to meditate. All in all I think it's a beautiful structure from outside and a place worthwhile to visit inside. 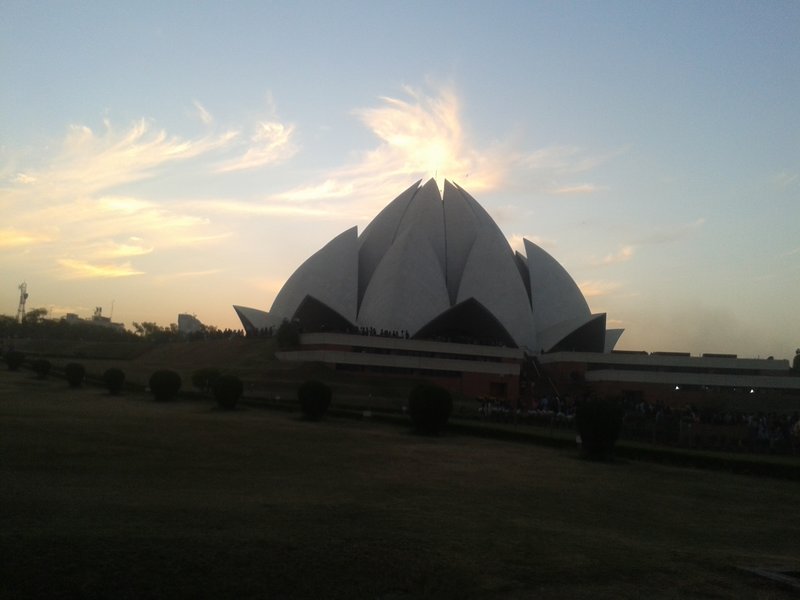 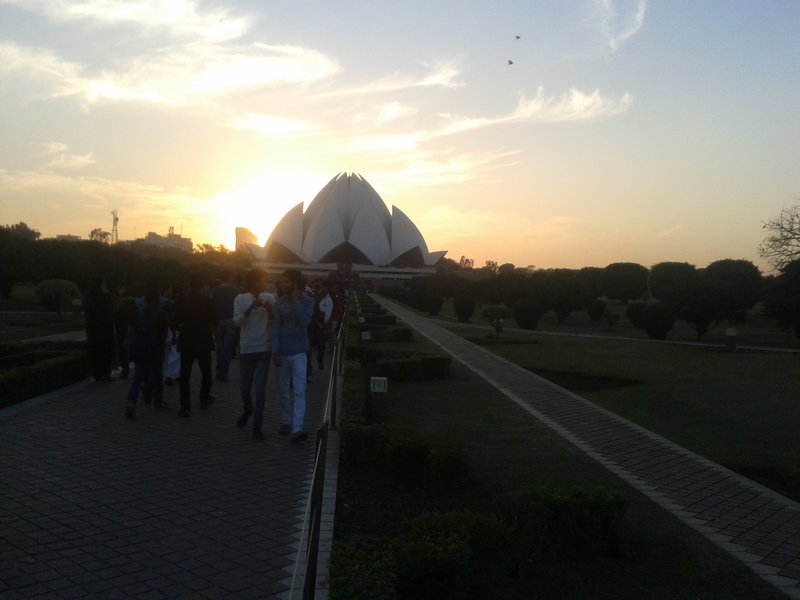 The easiest way to go back is to catch a metro from Orkla station.