There is no one who has been to Thailand and never heard of Ping Pong shows. When I visited Bangkok for the first time back in 2010 I agreed with one of my fellow travelers that we must go to see a Ping Pong show when we return to Bangkok. Unfortunately James got stuck in Cambodia and I decided that it would be supper creepy to go and see one on my own. Hence I had to leave Thailand without ticking this one of my bucket list.

5 years later fate brought me back to the Bangkok, this time accompanied by my girlfriend. This time it had to happen!

There are herds of tuk tuk drivers hawking around Khao San road making "pouch"-like sound and saying "you want see ping pong?" and sticking a menu like that right in your face. 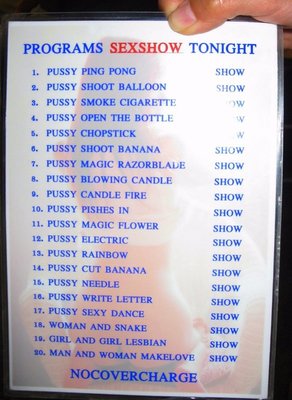 needless to say going anywhere with those scammers is a sure way to get ripped off and find yourself in the whole heap of trouble.

I have tried googling around on "how to see a ping pong show in Bangkok" and came up with a whole lot of reports on "how to NOT to see a ping pong show in Bangkok".
Apparently it's a massive scam, where you are likely to be overcharged for everything including the air you breathe, locked in in a basement and ruffed up by a bunch of naked women while being threatened with Thai mafia. The common trick is to lure you in promising something like 200 bath for show, and than tell you that that was only to see one show, but there were several girls on the stage and each of them did several performances and your bill comes to 8000 bath.

I also read about one story which made to fall of my chair and almost pee myself while being seriously concerned. It was about a guy who was shot in his eye by a ping pong ball. The eye got infected and had to be removed. I wonder how does he respond when asked "mate how did you loose your eye?" "I was attacked by a rancid pussy...".

Basically our internet research showed that there is hardly any decent ping pong shows left in Thailand, and most of them are confined to Pattaya...

We decided to not despair and go and try our luck in world renown Soi Cowboy. 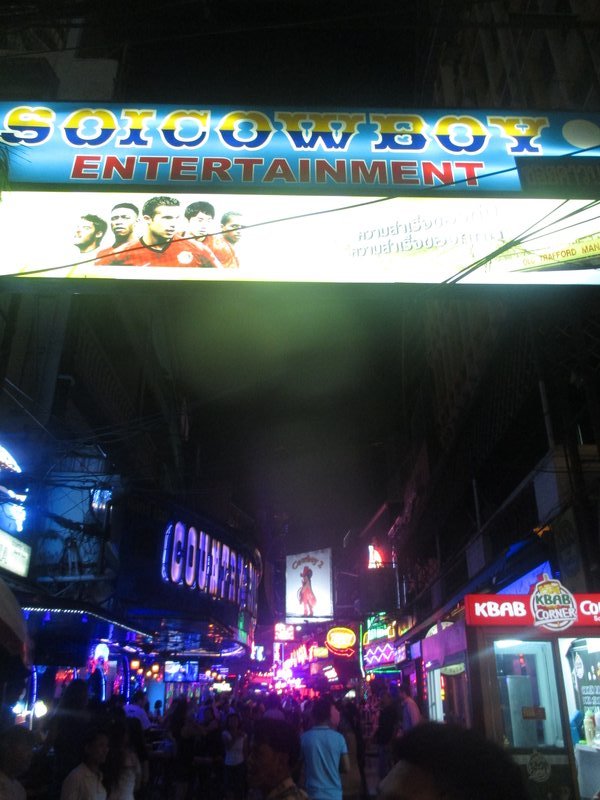 Soi Cowboy looks much more civilized than we would expect. The street is fenced off from both sides and there are heavy cops guarding entries. Inside the alley there is hardly any hustle, a lot of offers and price lists are on display. Actually we found it to be a way more relaxed place to grab a drink than most of Khao San. We got a couple of drinks and took a seat outside to people-watch. I'm not judgmental, but this was a real delight, some of the guys you see there look as if the came out straight from "To catch a predator", hugging two adolescent girls and heaving the biggest, dirtiest smile ever. I'm gonna get it tonight, fuck yeah! Ok, I am judgmental. 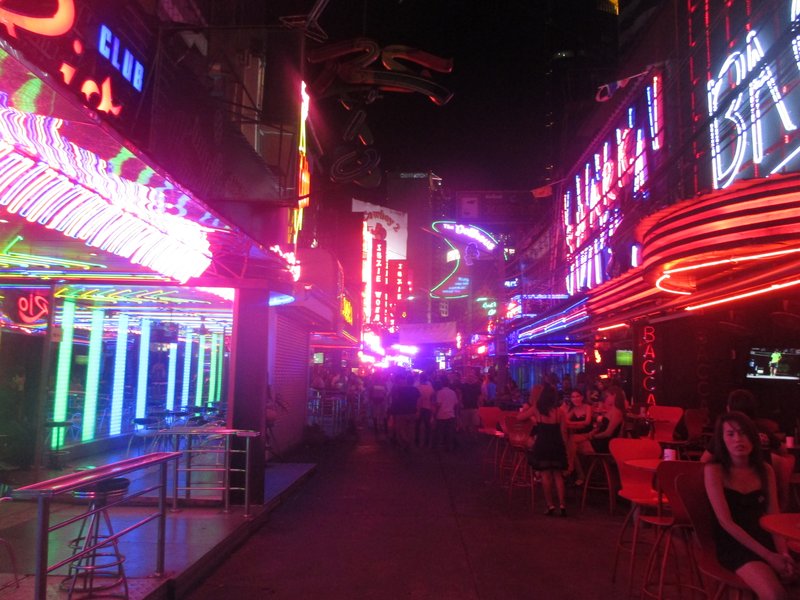 When we ensured that there were no ping pong championships going on at Soi Cowboy, we decided to go for a walk and pop into Nana Plaza. I red that there was a place called Angel Witch which had sex shows including ping pong. 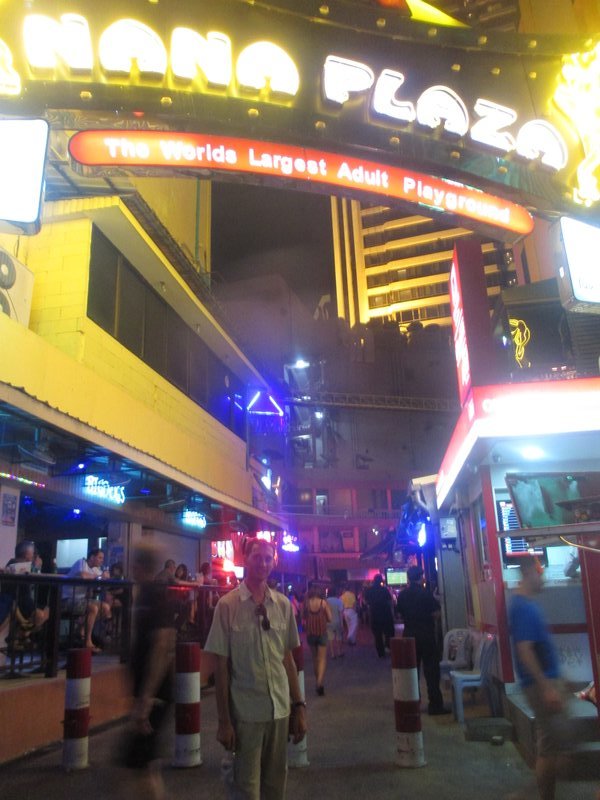 Nana Plaza is way creepier place than Soi Cowboy. Essentially it looked like a sex ghetto, with a bunch of working girls lining up outside as if they were waiting for a bus which will never arrive. 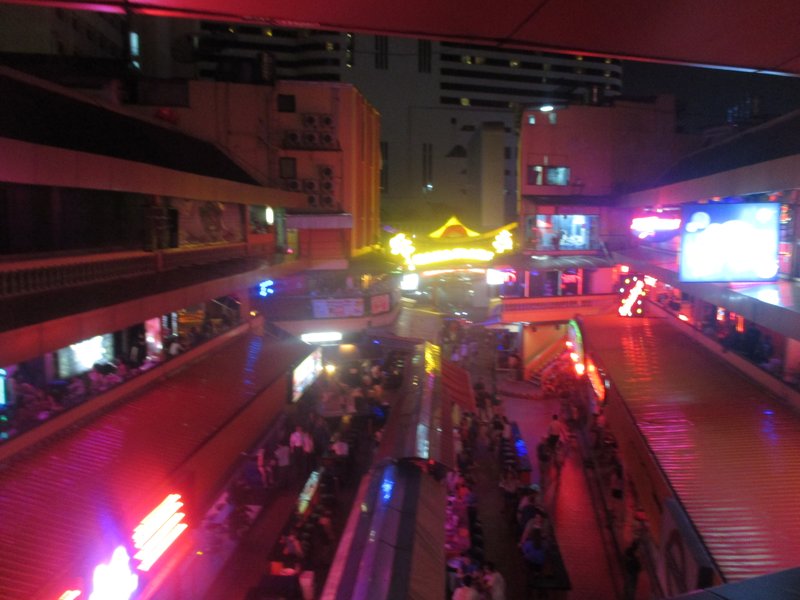 To be fair Angel Witch is actually a nice place, very professional they give you a bill with your drink, a beer is 150 bath, no hustle and the show is actually very artistic and nice to watch. Recommended, but no ping pong.
Well that was it, the next morning we were going to Chiang Mai and the ping pong show was gonna elude me once again...

Not so fast!!!
We got back from Chiang Mai a day earlier, this was a sign from above! Now or never! We had to go to the dirtiest, sleaziest and dodgiest part of Bangkok - Patpong.
Being aware of all the possible scams that were waiting for us we decided not to take any chances. I left a the hotel my walet, all the cards, mobile phone and my watch, taking only 1000 bath which I was prepared to loose.
Patpong is nothing like Soi Cowboy or Nana. It's a cross between a Brick Lane market and Soho with a bunch of Pimps eager to take you to the Ping Pong show.
Patpong is made up of two street Patpong 1 and Patpong 2. We circled around and peaked in windows until right at the middle of Patpong 2 we haven't settled on this one. 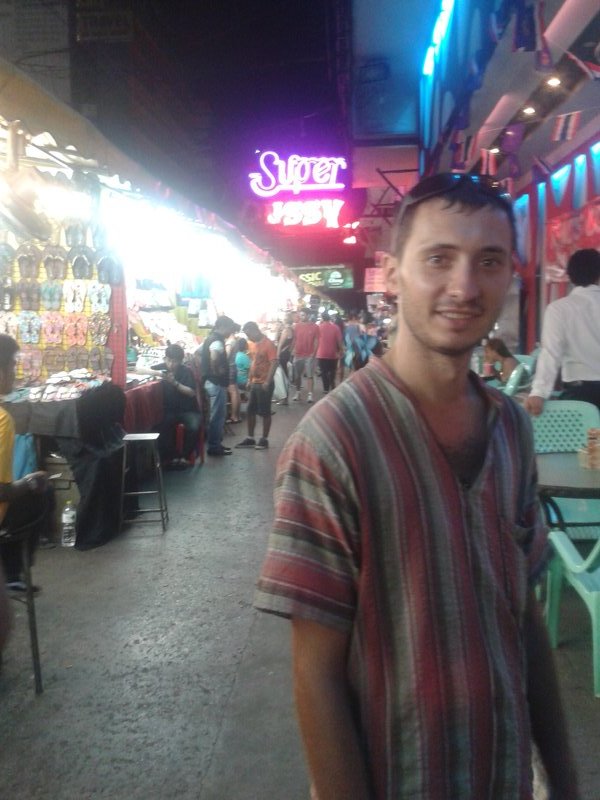 In Case you wonder the place is not really called "Super ussy", the "P" is out.

There was a girl at the door who explained that all is included, we only had to pay to her and that is it. 300 bath would get you an entry card which includes one drink and the show. We payed up and went up. First we missed the show room and went up to the second floor which looked supper creepy, but we were turned away by one of the Bangkok's finest pimps.

Am I actually going to write about a ping pong show? About time init?

We took a sit at a corner by the door (so we could do a runner if anything), but we were quickly moved to the front row VIP seats. At this point we realized that we were the only-ones there.
There were 3 girls who were quickly swapping one another.
I'm not going to describe all the tricks as you probably already know what they are and my description won't make them any justice. The only thing I'm going to say - I didn't find the show sexual in any way it was more like watching a circus performance. I didn't found it degrading ether, this probably follows from the previous point.
After completing all the tricks from that menu in the beginning of the post the girl proceed towards the highlight - Ping Pong.
Some things you just cant unsee...
Suddenly we were given ping pong rackets. This was the moment when alarm bells rang in my head - "The LOST EYE"!!! I put my sunglasses on and went into a defense mod! I'm goint to stand my ground and not surrender any of my eyes to a rotten pussy!
She was loading two balls at once and launching them right at our heads. There is only one thing I can say - What a shot, what a precision! Respect!
We managed to fend of all the balls and NO Eyes Were Lost during this experiment!
While leaving a gave a girl a tip as I though that was expected and see was genuinely surprised.
All in all it was a good experience and a good thing to tick of your list, it ended safe and without having to put a fight with fierce Bangkok mafia!

Hopefully this post will help someone on their next trip to Siam.