Mazeri to Mestia - an adventure of our lifetime

An overnight trek from Mazeri to Mestia

To hike from Mazeri to Mestia and onward to Ushguli. Mestia to Ushguli part is very popular with well-marked trails and lots of home-stays along the way. We decided to make it more fun and supplement by an extra day of less populous Mezeri - Mestia trek.

Mestia is a capital of Upper Svaneti region and a major tourist destination in itself. People come here for trekking, to see Svan towers and just chill in the beautiful setting among 4700 meter peaks.

Mazeri is much less visited, but it's popular with climbers who tackle Ushba. To get to Mazeri we took a marshrutka from Zugdidi towards Mestia and asked to let us out at Becho. From there we hiked 7,5 km on a jeep track up to Mazeri. As you hike up you get the first glimpse of Ushba being wrapped in clouds. 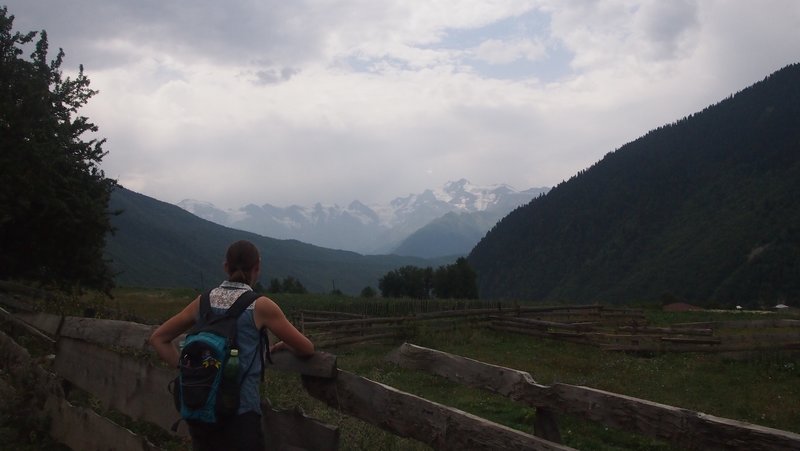 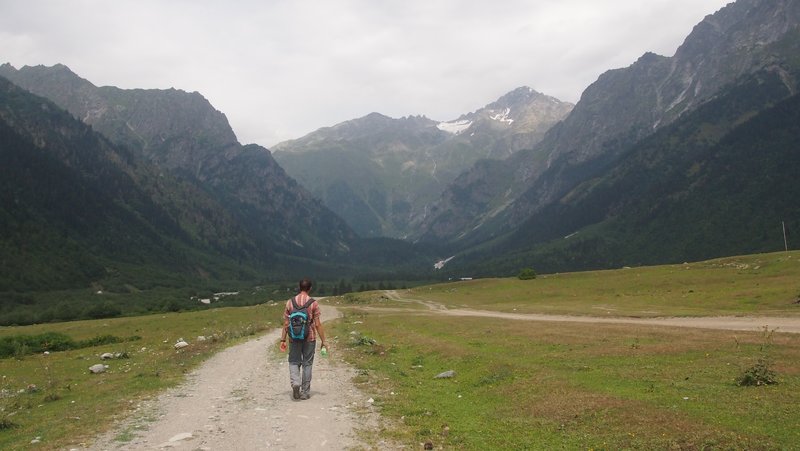 We quickly found a place to stay in a guest house of Yuram and Djamala, negotiated price down to 35 GEL for half-board. 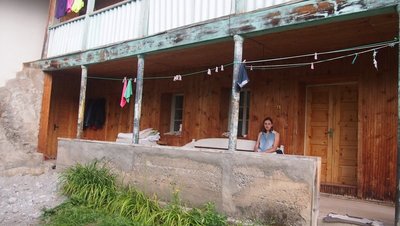 Yuram and Djamala took really good care of us, we stayed with them for 3 nights, talking a lot about how Svaneti and Georgia overall changed over the last few years, and drunk some really strong Cha Cha (moonshine) Yuram used to be a boarder guard so he knows the area very well and can tell you all about the surroundings.

It's about 16 km from Mazeri to Mestia and should take about 8-9 hours. Altitude start/end: 1600/1420m; highest point is Guli Pass - 2960m. The trail is marked by quite a common marking of red and white stripes (just like Indonesian flag). GPS on my phone has been playing up lately, the day before it showed that we were in the middle of the Ushba glacier when we were about 5-10 km off mark. It wasn't a problem at that point, but created a concern that I couldn't fully trust the GPS reading.
We left about 7 am planning to make it Mestia by 4 pm.

We followed the markings and occasionally checked GPS map on my phone. I use RMaps and MapsMe, both work offline, and Rmaps allows you to download Open Cycle topographic maps. By about 10 am we have reached a small clearing which had a few shepherd's plywood cabins and a small fenced off area for cattle.

Following the marking we have turned left and carried on walking along the creek coming down the Usba glacier. This was the point when I remembered Yuram saying that apart from the place with the cabin's there wasn't any water on the way... so what is the deal with the creek?
I checked my GPS and we were going way of course towards Ushba, but than there were markings so what to trust? Could it be that my GPS is wrong again and we are on the right trail? or the map is wrong? or the old trail is no longer there and the marking lay the new trail? 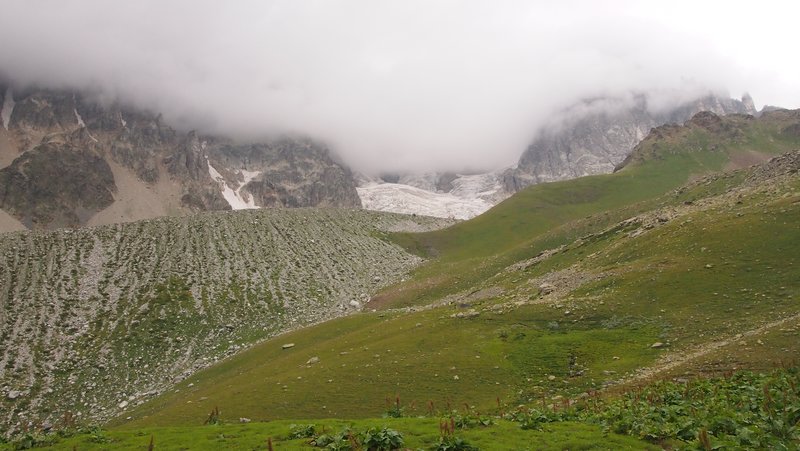 We could see something ahead of us which looked liked Guli Pass. I got really disoriented and ran up a hill (didn't even drop my backpack), to get some sense of what was around us and if there was an alternative trail to the right that we could cut to. But there were just more hills and gullies and nothing looked like the map.

I decided to carry on following the marked trail. It must be leading to Mestia, and in any case, it's easier than trying to cut through the mountains off trail, especially when we couldn't trust the GPS.
After another hour the clouds cleared and I could see something that looked very much like Ushba glacier, we were right at the bottom of it. At this point it was clear that GPS was right and we were way off our course. I saw a small tent on an edge of the glacier, dropped my back pack and went to see if I could find someone. The tent belonged to 3 polish climbers. The day before we saw a chopper circling Ushba, Yuram told us that a climber died on the mountain. The guys told us that the chopper was one of their mates and he only broke a leg and was fine. 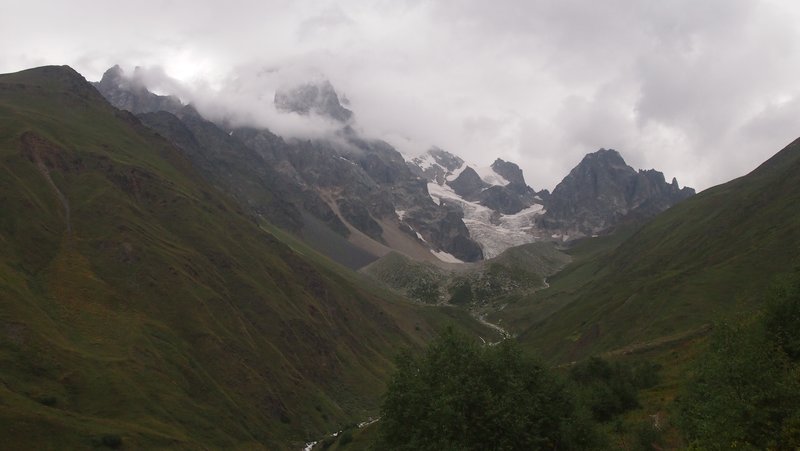 We checked their map against my GPS and it all made sense. The markings were leading right to the middle of Ushba glacier, and if we carried on in that direction we would end up in Russia, and that wasn't part of our plan.
Turns out that Georgians mark all the trails in exactly the same way. That wouldn't be a problem if the trails didn't cross... Marking two interconnecting trails with the same mark is like: 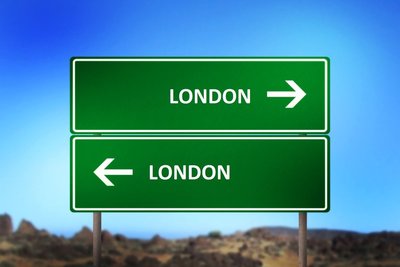 It was already about 4 pm, was clear we wouldn't make it to Mestia, and we burned far too much energy going up and down the mountain. In theory we could have gone back back to Mazeri, but a thought of telling Yurama and Djamala how we messed up was a bit to much. We decided to go back to the cabins, which must have been the place where the trail splits, and stay there overnight.

The cabins were really thin, they had some metal-framed beds and one even had a wood-burner. As we were going to have late lunch and a dinner in Mestia, we didn't have much in terms of food. Luckily Jamala packed us some bread and cheese, we had one pack of pot noodles and a whole field of blueberries!

After collecting the blueberries, eating cold water-soaked noodles and leaving the bread and cheese for breakfast we looted the area for wood, ransacked the fence and fired up the wood burner.
At midnight a herd of bulls showed up. They started fighting among themselves, than must have smelled us and started to circle around that cardboard hut, occasionally giving it a nudge. That lasted for good couple of hours until the bulls lost interest and moved on.
As the hut was so thin the heat was escaping and it was getting really cold as soon as the fire died down. We spent the whole night burning the rest of the fence and cuddling next to the fire.

We decided to leave as early as possible, and hit the road around 6 am. From the huts, we hiked up until we reached the top of the pass. We have wasted quite a lot of time and energy on trying to find a marked trail or align with GPS. There isn't really a trail, there are occasional markings pointing you in the right direction. But basically you just have to negotiate your way up until you reach the top of Guli pass.

This is where it gets really difficult, the way down the pass is very steep and guess what? there is no trail either? We have tried to align with GPS trail, but it quickly became obvious that it must have overgrown or otherwise disappeared. At the end we had to take bearings using a compass and descend down some very steep hill being knee-deep in slippery grass and loose rocks. This was our first hike on this trip, and I really didn't want it to be our last one...

Once we came down to the bottom of the valley it was easy to find and follow the trail. We bumped into a few people hiking around the area. It took us about 2 hours to get to the top hill hanging over Mestia. 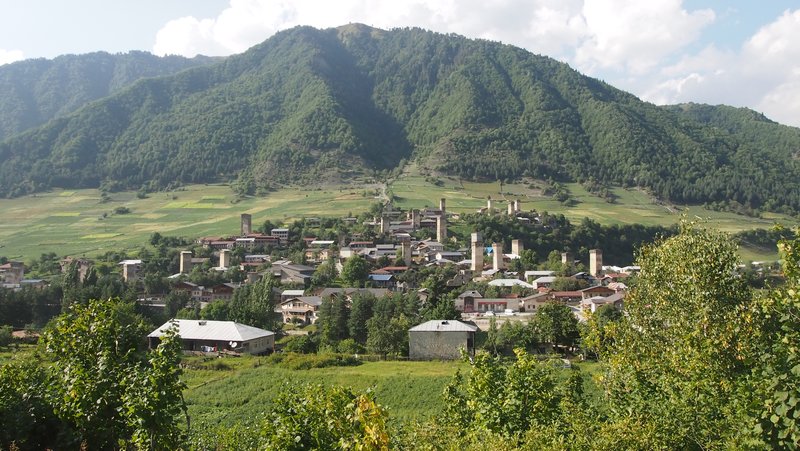 We were so exhausted that we decided to cut our loses and abandon the trip in Mestia. Afterall we still had 2 months of trekking in Nepali Himalayas ahead of us.