==This is a chapter 2== We have just completed Annapurna Circuit in 10 days, and decided not to loose any time and head straight for base camp!

This was the best start of the day on out trip so far. Why? Because Tatopani has hot springs! Broken into a few pools and showers of different temperature. It's a pleasure that can't be explained... to have a hot bath after 10 days on the road and finally feel clean. The pool costs 200 npr for foreigners and they also sell Beer and Pop Corn for 400 npr.
Actually we came across the Beer + Pop Corn package several times, weird combination. I don't know that came about. I guess someone just came up with the idea that western folks like Beer and they also seem to like Pop Corn,and than everyone else just copied it.

It was one of the hardest days on the trail. You have to consistently pick up altitude. Overall 1600m altitude gain. You pass through some really nice villages, great views and a couple of waterfalls. Unfortunately I have lost most of the pictures of this day.

One thing I can say - this day will kill your muscles! It will hurt and you will be glad it's over.

The other thing that was killing me were my hands, thumbs if to be more precise. Two days ago when we were getting over Thorung La at 5400 m, I have taken my gloves off on the way down. Man, you can't underestimate sun intensity at that altitude. I didn't even realize that the top of my fists (as you hold waking poles) got sun-burned as hell. How can your hands burn, this just doesn't happen, well @5400m it does.
If this happens there is nothing you can do but suffer through it. If your burned-hands exposed to even week sun they will hurt as hell. If you put gloves (or socks) on, they will warm up and hurt even worse.

Well that was our day... 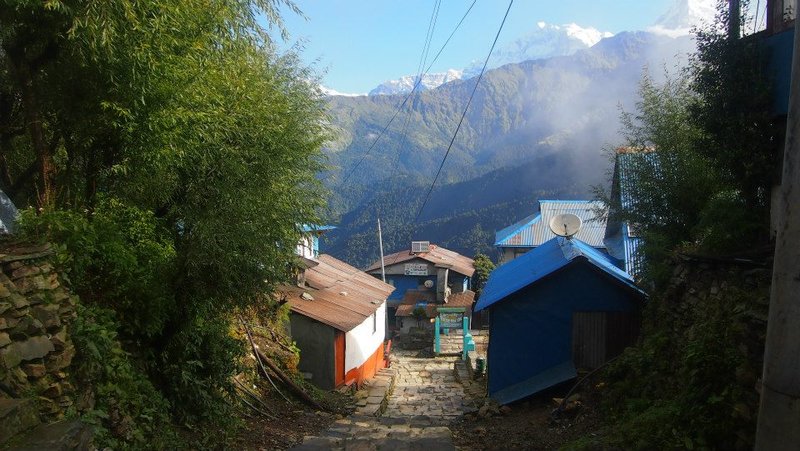 We decided to skip Poon Hill as we were quite tired from the day before and had a long way before us.

This day has a lot of ups and downs as you have to get over the hill at Deurali to the valley below and than up to Chomrong and back down and up to Sinuwa.
The first part of the day you pass through some vert humid forest, than you hit a well populated area with endless rice paddies.

Chomrong is a solid town with a proper shop where you can buy biscuits, chocolates and drinks at reasonable prices. Beyond Chomrong is a plastic-free zone, you can only buy boiled water for about 100 npr. 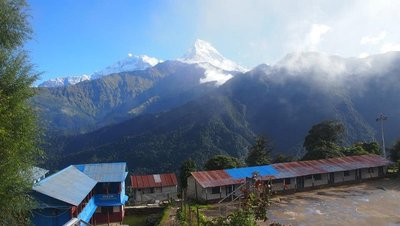 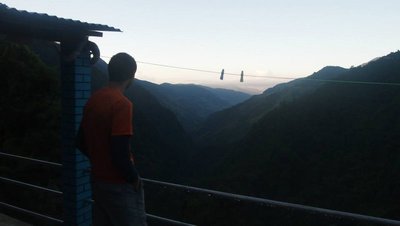 This is much longer than it looks. It took us 8 hours to cover just 14 km, mostly because you are moving constantly up picking up 1500 till MBC. You pass a lot of bamboo grows and thick forests. By the time we got to MBC the mountains around us were engulfed in fog, we couldn't see further than few meters ahead. If it wasn't for the fog we could have pushed to ABC. You shouldn't gain that much altitude in a day, but we were well acclimatized from the previous leg and didn't struggle. 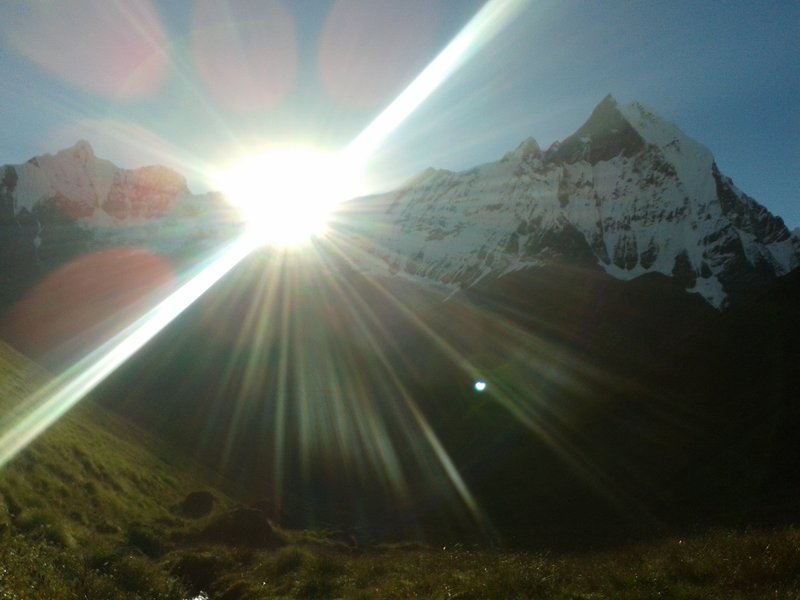 Machhapuchhare - this is what we have woken up to!

MBC was the most expensive place so far. We have payed 300 npr for a room and 550 for dal bhat.

The thing about ABC trek is that you actually don't see Annapurna until the very last moment. Some 1,5-2 hours and we got to this! 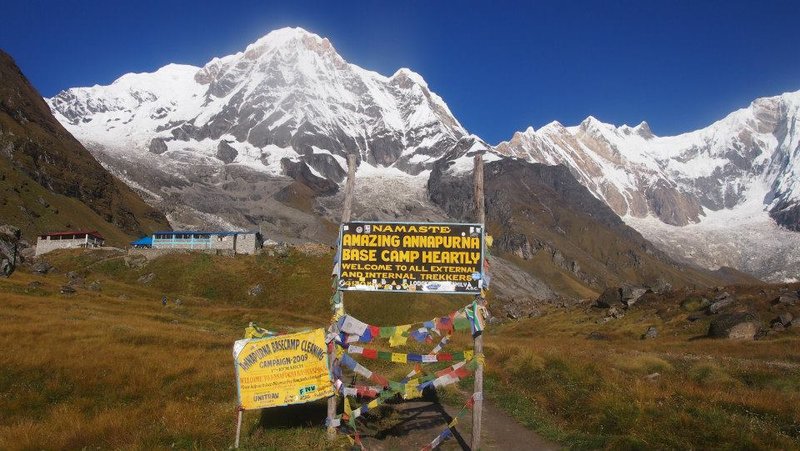 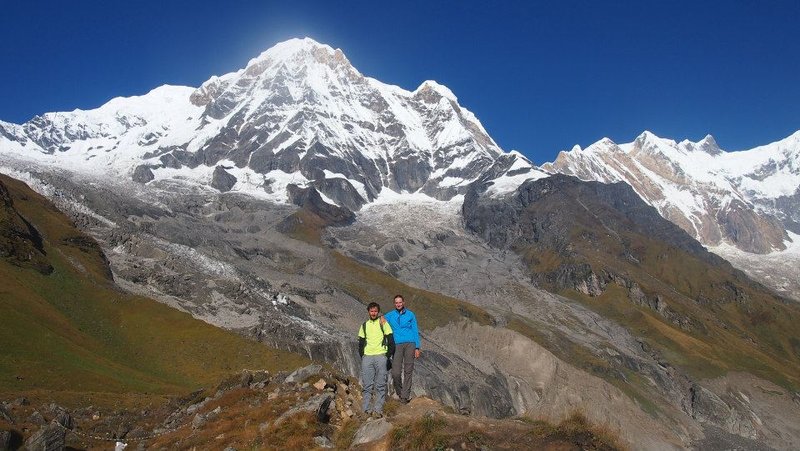 It's so close, so big and so white. ABC is only just over 4000m hence you see 4000m rock towering right over you. This is probably the best view of the trip!

The rest of the day we had to retrace our steps back. It's long day but walking down does help. A good 10 hours later we got back to Sinuwa for Dal Bhat. 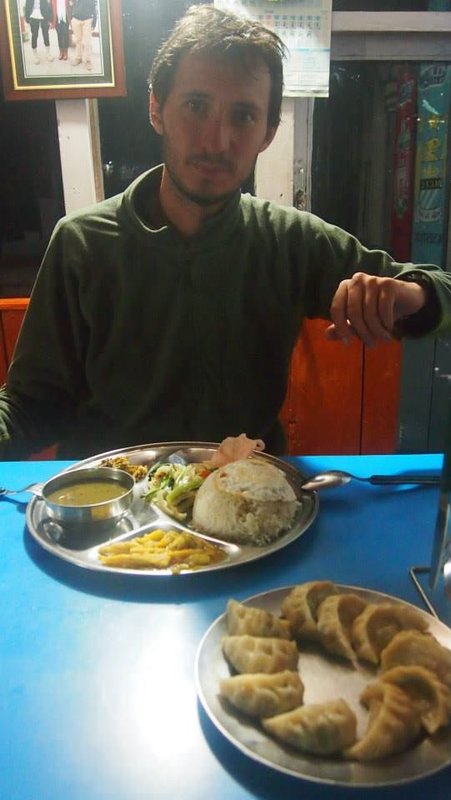 I look really washed up in this picture. It also looks like I have lost about 10kg, this is what not eating at the 4000m+ altitude does to you (this is covered in the chapter one).

This is another day full of up's and downs.
The highlight of the trip is of course Jhinu hot springs (50 npr). We have actually debated if we should do the hot springs as this involved walking down from Jhinu to the hot springs and than obviously back up. Well we have decided that we won't get another chance to lase in hot springs hence... 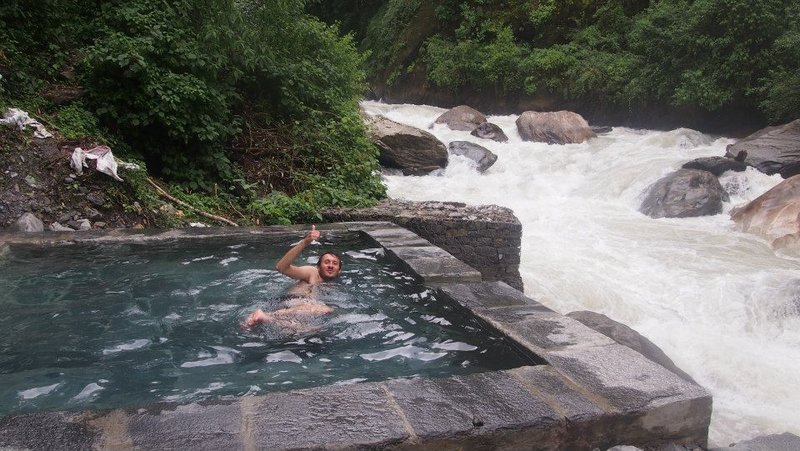 In few hours we have reached the New Bridge (a very old bridge) and crossed over to Landruk. In Landruk we saw jeeps, hence I guess you could take one down from there. They also were busy building the road and it might be that it will be properly linked to civilization sometime soon.

You can feel civilization creeping in, garbage, shops, jeeps. However, I can't deny I was happy to Jump on that Bus and onto Pokhara!

P.S. the bus drops you on outskirts of the town, taxi drivers will take you lake side for 200 npr - take it! Getting a local bus/walking is not a good idea as we learned :-)